Sunspot Cinema was created last year by film professor Christopher Harris. Harris envisioned an outlet where people could discover an entirely new world of film, a world that lies outside the boundaries of categorized, commercial cinema.

Harris says, “They are films that attempt to explore and redefine our accepted notions of what films can be.” He continued, “Experimental films are fascinating, challenging and most of all fun.” His goal is to bring these rare, abstract gems to the UCF and Central Florida community in their original and intended formats.

Harris has been encouraged thus far by a strong and enthusiastic audience turnout.

There is already quite a buzz around campus about Sunspot’s third event, Roger Beebe’s presentation of multi-projector shorts. Beebe is a world renowned filmmaker whose creations have been shown at prestigious venues such as Sundance, the Museum of Modern Art, the CBS Jumbotron in Times Square, and even as far as McMurdo Station in Antarctica. Beebe is also a professor of Film and Media Studies at the University of Florida and owner of Video Rodeo, an independent video store in Gainesville, FL.

Beebe’s most recent creations have explored the idea of using multiple projectors simultaneously. The performance ranges from the relatively straightforward two-projector films “The Strip Mall Trilogy” and “TB TX DANCE” to the most elaborate, an eight-projector meditation on the mysteries of space “Last Light of a Dying Star”, making its second to last public appearance before the piece is retired.

The films can only be screened with Beebe actually running the projectors, and running from projector to projector creating a collage of different formats including super 8mm, 16mm, video and digital.

This is a truly once in a lifetime chance to experience experimental film at its finest. Orlando is fortunate to have this performance by Roger Beebe and for Sunspot Cinema, who is currently the only local organization making these types of opportunities available.

Chris Carullo, one of Sunspot’s leading student activists states that “Sunspot Cinema informs the public that there is not only one form of cinema, the one at mega-theatres that screen the weekly Hollywood film, but a cinema that is infinite, full of unique forms of expression”

The event will take place at the UCF main campus soundstage in the Nicholson School of Communication on Friday, October 30. There will be free parking in Garage H. Doors will close at 7:00 p.m. and no admittance will be allowed until the end. 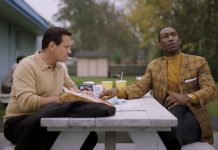 Review: Oscar Winner ‘Green Book’ Could’ve Been Made 50 Years Ago

‘Beneath the Helmet’ Documentary Screening Held at UCF

‘Interstellar’: What A Trip