After a perfect non-conference slate where the UCF men’s basketball team started 14-0, the Knights seemed poised to take Conference-USA by storm. However, the Knights (14-3, 1-3 C-USA) haven’t exactly gotten off to the start they anticipated after dropping their third straight game, a 74-62 defeat to East Carolina (10-8, 2-2) on Wednesday night at the UCF Arena.

After winning their first conference game of the season over Marshall, UCF has lost three league contests in a row and seem to be reeling after a highly touted start that saw the Knights climb into the national rankings for the first time in school history.

But Wednesday night saw the Pirates take control of the game early as they shot 75 percent from three-point line in the first half and never looked back, ending the Knights perfect 10-0 record at home. Jontae Sherrod led ECU with 21 points and nine rebounds.

UCF went down by as many as 15 points in the first half and while they made several runs, the Knights were never really able to put it together on either side of the floor, especially from the free throw line, where they went a woeful 11-for-25 in the game.

ECU was able to shut down UCF defensively with their size advantage and held a 41-33 edge in rebounding. The Knights also weren’t able to get many stops as the Pirates dismantled the Knights from beyond the arc, shooting 10-for-17 (59 percent) in the game.

“We did not do a good job guarding the three-point line. That’s always an emphasis for us and we got deep in hole because they shot the ball so well,” point guard Taylor Young said.

Young, who tied his season high in minutes with 14, played well down the stretch in the backup point guard role, as starter A.J. Rompza played limited minutes due to a nagging foot injury.

“He came in and gave us great minutes. I thought he played with good energy; he was running our offense and he hit a big shot. He’s going to be able to start playing some minutes for us here right now,” Head Coach Donnie Jones said.

The Knights were led by Issac Sosa, who dropped 16 points on 50 percent shooting from the three-point line. Sophomore Keith Clanton posted a double-double with 12 points and 10 boards to go along with six blocks. Marcus Jordan also contributed 11 points and four assists for the Knights.

UCF was ultimately doomed by their poor free throw shooting and they simply weren’t able to overcome the hole they put themselves in early in the game.

“Give East Carolina credit- those guys hit some big shots early on. They hit their first six threes, which really set the tempo. We had a chance to get back in it, but we missed 14 free throws and that just kills your momentum. We could never get that momentum to contend in the second half,” Jones said.

Despite the poor shooting, the Knights threatened late in the second half, bringing the score within seven points. However, the Pirates were able to close out the game by forcing turnovers and hitting their free throws down the stretch.

Erin Straughn also contributed for ECU, posting 12 points on a lights out 4-of-5 shooting from beyond the arc, while Darrius Morrow had 14 points and six rebounds.

The Knights will look to put the last three games in the past as they continue their conference slate Saturday night against Rice at the UCF Arena. UCF will need to rebound to get their season back on track, but Coach Jones is confident his team will be able to recover from their recent struggles. 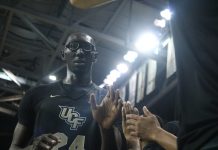 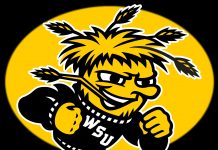 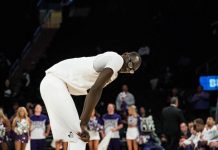