It was a Monday night in July. Former UCF defensive end Robert Pritchard was at his home in Georgia and decided to go downtown with his cousin. Little did he know that decision would come to possibly save his life.

“It was like a random thing, as far as me deciding to go out that night. Regularly I wouldn’t really be doing anything,” he said.

On his way to pick up his cousin, Robert noticed that something was wrong.

“I remember I was driving to my cousin’s place. My speech started to mess up and it was hard to get any words out,” he said.

Once he picked up his cousin, he mentioned that something wasn’t right but didn’t know what. He was starting to have trouble keeping the car straight as well.

“I kept drifting to the left a little bit. I had to really concentrate to keep the car on the road,” he said.

Robert and his cousin’s plans to go downtown fell through however, and they ended up at a friend’s house nearby. When they got there Robert’s weird feeling turned into something worse.

“Basically we got to my friends house, and as soon as I opened the door I kind of like, slid out of the car and my whole side gave out. After that I was still able to walk but my whole left leg was pretty much limp, ” he said.

He managed to get inside his friends house but then had an uncontrollable seizure, one that would mark the beginning of a tough battle with a rare and severe stroke. They found out later that it was caused by a blood clot in his brain.

So they rushed Robert to the nearest hospital. The hospital they went to, Emory University Hospital Midtown was one of the only two hospitals in Georgia that would have known how to treat his condition. He happened to be just five minutes away.

“I was at the right place at the right time, you could say. If I had decided to stay home that night, the drive to the hospital would have been more like 45 minutes to an hour, and who knows how bad the damage could have gotten during that time,” Robert said. “It was like a blessing that I was so close.”

While at the hospital, Robert had to keep under close monitor by the staff. His brain was swelling, and the damage could have become permanent if they didn’t make the bold decision to remove part of his skull. The surgery was successful. He also became the most critical neurology patient at the hospital for a week of his stay.

Now, nearly four months later, Robert is making great strides in his recovery. He has been cleared from the hospital and is undergoing aggressive rehab to get back control of his body.

Robert says he owes much of his recovery to the doctors, nurses, and therapists that have taken care of him. The road to recovery has not been easy, however.

“At first I had a trach, you know, the hole they put in your throat to help you breathe. I couldn’t talk for weeks or eat. They had to feed me through tubes. That and the whole idea of not being able to maneuver or do things for myself was the hardest part,” he said.

Nevertheless Robert is working hard to get better; in a year he should be fully recovered. Next summer he plans on returning to UCF to obtain his master’s degree in criminal justice.

He says that the support he has received while recovering has helped him a lot. He’s appreciated much good faith from his family, friends, strangers, and the UCF community.

“I’ve gotten tons of support, I can’t say enough about it… Coach O’Leary arranged for my former teammates to send me personal videos with their well wishes. I wasn’t expecting anything like that… it really gave me a boost,” he said.

Robert feels that football has actually played a big role in his recovery.

“I think the experiences that I had with football have helped me through this and in life in general. Coach O’Leary’s (football) program wasn’t an easy thing to do. It’s helped me a lot as far as having that mindset to keep pushing through.”

While Robert has received much emotional support, money has become an issue as well. His medical bills have started to roll in, the first set totaling nearly $300,000. While his family is doing everything they can, they are graciously accepting donations from those willing to help.

Donations can be made to Wells Fargo bank account number 2987907058 under the name Robert Pritchard. They can also be made online through Paypal using the address robertpritchard72@gmail.com.

In the end, Robert is remaining positive.

“I mean, I obviously wish that it didn’t happen, but it did, so I’m making the most out of the situation and working hard to get better,” he said. “Besides, I can’t really feel sorry for myself because it could have been a lot worse.” 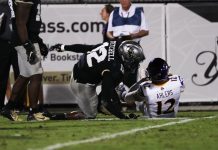 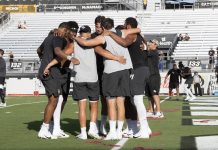