June 26 will be a day to remember as the United States Supreme Court ruled same-sex marriage legal.

KnightNews.com went to campus and interviewed some students on their thoughts.

KnightNews.com reached out to a few University of Central Florida officials and Pride Coalition for commentary on this historic day. 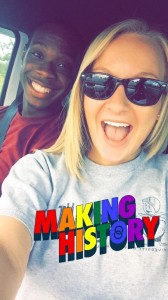 “Today is a great day for our country. We are excited for the people that didn’t have the right to marriage before, and happy that their love will [now] be recognized by all states. Love won today,” said Zona.

UCF Chief Diversity Officer Karen Morrison was not available for an interview but sent a statement:

“Today the U.S. Supreme Court handed down a decision significantly and positively impacting the LGBTQ community of the University of Central Florida. By ruling that marriage discrimination against same-sex couples is unconstitutional, the Supreme Court has put an exclamation point on the long struggle for equal access to the benefits of marriage, emotional, legal and financial. The LGBTQ community and its advocates undoubtedly agree with Justice Kennedy’s opinion as it states, when discussing the importance of the right to marriage as equal protection under the law that these citizens “…ask for equal dignity under the law. The Constitution grants them that right.”

KnightNews.com Facebook messaged Pride Coalition at the University of Central Florida, and although the message is marked as “seen” they did not respond.