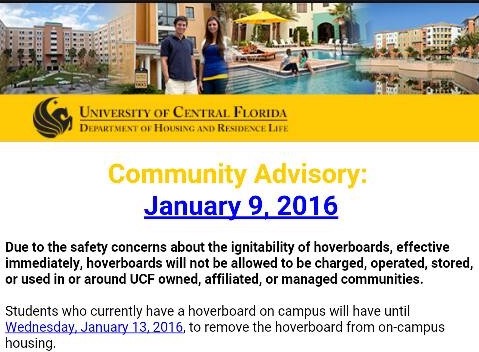 The University of Central Florida has decided to place a temporary ban on hoverboards.

A UCF Housing and Residence Life newsletter said, “Due to the safety concerns with the ignitability of hoverboards, effective immediately, hoverboards will not be allowed to be charged, operated, stored, or used in or around UCF owned, affiliated, or managed communities.”

Students who currently have a hoverboard on campus will have until Jan. 13 to remove the hoverboard from on campus housing, according to the newsletter.

The National Association of Fire Marshalls has issued a warning regarding several instances of hoverboards catching fire and the United States Consumer Product Safety Comission is in the midst of an investigation into the safety of hoverboards.