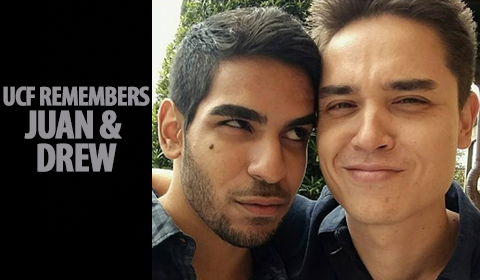 Two University of Central Florida Knights were among the fallen victims in Sunday’s Pulse Nightclub shooting.

Juan Ramon Guerrero and Christopher Andrew Leinonen were a part of the UCF family. Their names, listed in memoriam on UCF’s Orlando United website.

Guerrero was a pre-finance student and Leinonen, who was known as Drew, an alumnus who graduated with a Bachelor’s and Master’s in Psychology, ’07, ’09.

“This Couple Killed in the Orlando Shooting Hoped to Get Married. Now They Will Have a Joint Funeral,” a TIME headline on the two read.

Drew’s mom Christine, made an emotional plea on WESH when she could not locate her son after the tragedy. Her plea went viral after she said she did not know where her son was.

“Our hearts are with the victims, their families, friends and colleagues. We also mourn and honor those members of the UCF family who lost their lives in this senseless act,” the UCF Orlando United website states.

UCF is hosting a candlelight vigil Tuesday night in honor of the fallen Knights and all the victims.

It starts at 7 p.m. at the Reflecting Pond and is being organized by UCF’s LGBTQ+ community with help from UCF’s Social Justice & Advocacy office.

The university has launched its Orlando United website as a source for the UCF community during these hard times. It includes President Hitt’s message, counseling information and ways to help.

Knight News will continue to follow this breaking story.