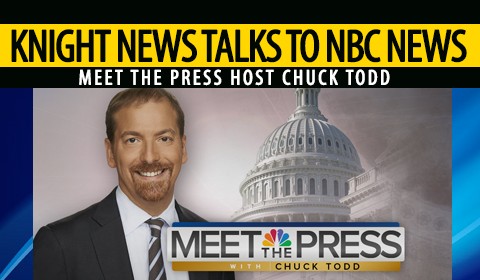 One of the most polarizing elections in United States’ history is coming to a close after over a year of campaigning, and for the entirety of that year both candidates have been battling for the vote of the millenials. But many millenials seem unenthusiastic about this election, with many saying they have a hard time supporting either candidate.

Knight News was able to conduct an exclusive one-on-one interview with NBC’s Chuck Todd on that matter, as well a few other topics. Many of you know Mr. Todd as the Moderator from NBC’s ‘Meet the Press’, and his very long and successful career as a political journalist.

Knight News was able to discuss the election as well as the current state of affairs in Washington, Mr. Todd’s keys to being a successful journalist on the campaign trail, as well as topics relevant to UCF, including the importance of media to fight for public records.

“I can not emphasize it enough, you have to fight, and you have to constantly fight.” those were Mr. Todds’s words on the importance of the media to fight for public records, and his response after Knight News told him they had to sue to get access to SGA records.

Todd explained that getting public records from all levels of the government can be a challenge. “One thing that all White Houses have in common, regardless of the party or the President in power is their goal of limiting access to the press.” Todd said. But Todd insisted that it is imperative for the media to keep fighting. “You have to keep fighting, because the minute you stop fighting, they claim that ground.” Todd explained that fighting for public records is “a duty to the next generation of reporters.”

Viewers can hear more from Chuck Todd tonight as he will be co-anchoring NBC’s “Decision Night in America” starting at 7 p.m.