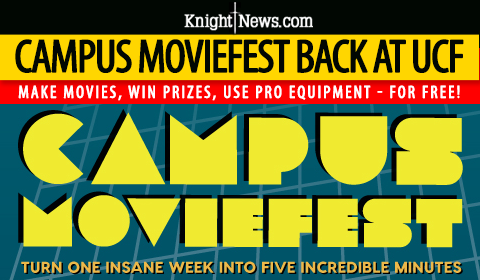 Campus MovieFest, the world’s largest student film festival, will be back at the University of Central Florida this January — promising incredible prizes and exciting, new opportunities for UCF student filmmakers.

UCF students participating in the fest will get access to professional camera equipment and editing software to make their movie magic — all for free.

The fest kicks off at UCF Jan. 17 with its campus launch, followed by the equipment collection on Jan. 23.

“During that time, students will have only one week to make the best possible five-minute film,” CMF said in a press release. “The CMF Tour provides training, support, and of course, amazing equipment — including a laptop loaded with Adobe Creative Cloud, a Panasonic LUMIX HD camera, and crystal clear sound gear.”

The visit to UCF marks CMF’s 17th annual world tour, which includes 50 campuses across the United States. More than one million students have participated in CMF since it began in 2001, earning more than $2 million in total prizes, according to CMF.

CMF says that this year “it’s bigger and better than ever – thanks in large part to our new presenting partner, Seeker!”

Seeker, a digital network for a new generation of bright and curious minds from Discovery Communications, helped CMF create a brand-new documentary category

Organizers say the tour this year is set to award more than $100,000 in cash and prizes, including $10,000 in case prizes from the new “Seeker” category. The category will offer stands a chance to share nonfiction works touching on science, world, exploration and more.

CMF is also promoting the chance at $10,000 in cash grants from the Elfenworks Social Justice category, and the chance to see their movie on Virgin America’s in-flight movie system. Some may be invited to screen their movie at the Cannes International Film Festival.

The top four UCF student movies will be announced during a red-carpet finale at 7:30 p.m. on Feb. 16. Those Jury Award winners will get a free one-year subscription do Adobe Creative Cloud — a $600 value — and will move on to the national competition at the CMF Grand Finale at TERMINUS.

Even those who don’t land in the top four at UCF are still invited to register and attend TERMINUS in Atlanta, where hands-on workshops, parties, exclusive film screenings and gaming expos will await — as well as opportunities to network with celebrities, industry leaders, and more.

Silver Tripod awards will be given in categories such as directing, editing, and acting. CMF says the awards will celebrate the achievements of UCF’s “most outstanding” participants.

UCF students can sign up for free at http://www.campusmoviefest.com/festivals/584-university-of-central-florida.