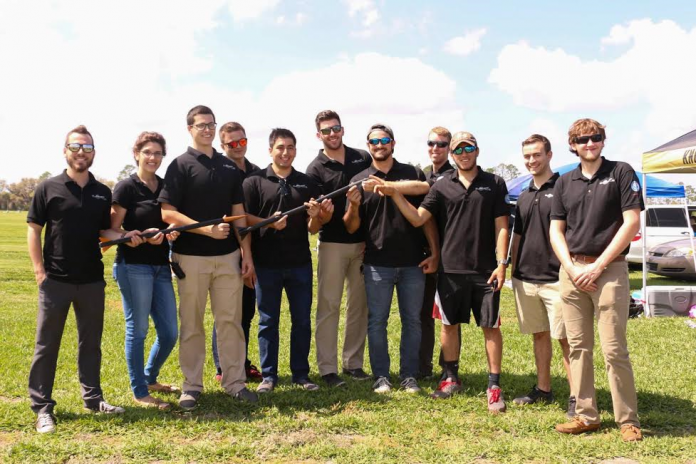 These UCF students are reaching for the stars.

They are part of a group called SORCE at UCF, which consists of 15 active members working towards one common goal: to send a rocket into sub-orbit. SORCE is not a registered club at UCF, but instead an organized group formed by students passionate about their mission.

“We like to think of it as an undergraduate research group filled with people who believe in what we do, each supporting the project with regular contributions,” mentioned the project leader, Gligur Georgievski, who is a senior at UCF studying Aerospace Engineering.

And UCF does have an edge over other universities. Georgievski shared that “UCF is the #1 supplier of engineers to the Aerospace and Defense Industries producing more graduates who get jobs in aerospace and defense companies than any other university in the nation.”

SORCE started their mission by competing in NASA-FSGC’s hybrid rocket competition over Spring Break, in which they placed 1st in the max altitude category with a rocket that launched 6,400ft, “a number the FSGC judges have never seen before,” Georgievski told us. The rocket took 6 months of designing, building, testing, and optimizing for it to reach this new height.

James Bell, a member of SORCE and senior at UCF studying Mechanical Engineering, interned with NASA last summer, bringing his adopted skills from the internship to the planning and executing of the rocket.

“When I worked at NASA last summer, I was interning under the Logistics department which was contracted out to Jacobs Technology. My main role was to help improve the efficiency of their warehouse on base and create databases so we could analyze areas of improvement. The main role of our contract was ground systems development, which was basically a large support system for not only NASA but other companies launching out of Kennedy Space Center as well,” he shared.

He mentioned how “Being exposed to these different operations on the ground helped me get a better understanding of the large amount of work required to prepare and launch a rocket into space. I used this knowledge as well as the curriculum I’ve learned in school to help create the Ground Support Equipment required for our hybrid rocket,” adding that, “We are just a group of young engineers with a passion for pushing the boundaries and testing the limits of our capabilities.”

With this successful launch, SORCE’s future is promising. At this pace, they may indeed be the first university students to launch a rocket into sub-orbit. Charge On!