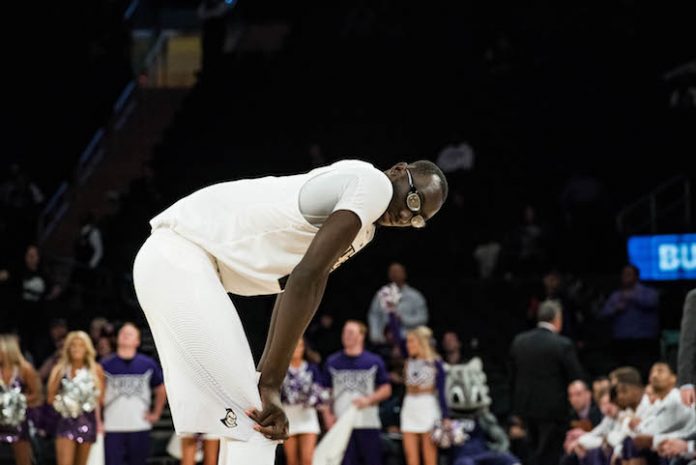 ORLANDO, Fla. – The reigning American Athletic Conference Defensive player of the year has announced that he will test the draft process following a breakout sophomore season, but will not hire an agent – allowing the seven-foot-six-inch center to retain his eligibility.

“He will be able to learn more about himself and his game during this process and we will be there to help him along the way.”

Fall will participate in the combine, and has until May 24th to remove his name from NBA Draft consideration in favor of a return to college athletics. Though he had a stellar season – leading the AAC in field goal shooting percentage (65.4%), placing second in defensive rebounds (6.0 DRPG) and in blocks (2.5 BPG) – the UCF big man is still relatively new to the game and the common opinion is that he likely needs another year of development at the collegiate level.

“This season has been by far the best I ever had. I had so much fun competing with my brothers every single day and representing the best university in the country. What we accomplished this year was special, and I am thankful to god for allowing me to be a part of it.”

“That being said, after having talked it over with my family and my coaches, I have decided to enter the NBA Draft. However, I will hold off on signing an agent keeping the option to remain in school. Thank you all for your continued support,” Tacko said in a statement via Twitter on Wednesday.

UCF’s men’s basketball team relied on Fall, as well as senior Matt Williams and fellow sophomore B.J. Taylor, as momentum-shifters in one of the program’s best seasons in UCF history. Under the leadership of Dawkins, the team earned 24 wins this past season and a trip to the NIT Semifinals in Madison Square Garden, New York City, among other milestones.

Tacko Fall’s performance earned the center the single-season record with his 75th block of the season in early March. John Friday held the record since for thirty years, 1986-87 season, with 75 blocks.

Fall adds The American Player of the Week and the Gildan Charleston Classic All-Tournament Team honors to his list of accomplishments.