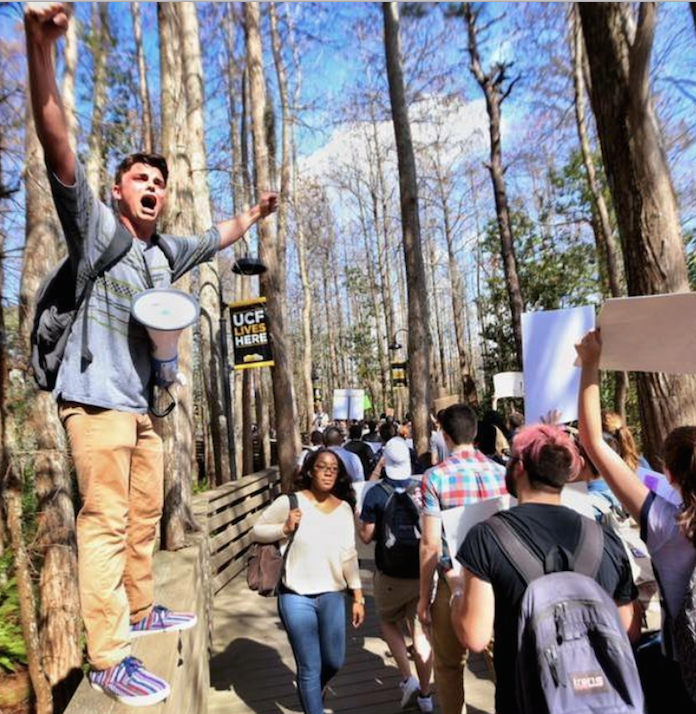 Knight News received screenshots of a Facebook post by Lanza where he writes, “And let today be a lesson to all; Trump supporters are not welcome on our campus.” 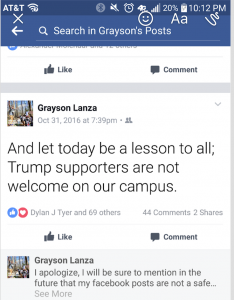 Statements like this are not unusual for the new Diversity Chair, and are not just limited to Facebook. Daniel Hanna, a student who voted for President Donald Trump last November, recounted to Knight News his experience with Lanza at a pro-Trump rally outside the Student Union last September.

“When we started debating politics, I eventually said you know the great thing about this country is we can both differ regarding political views but we can openly discuss it,” Hanna said. “Then I offered him a handshake. He said I’m not shaking your hand, I do not tolerate you and you are not welcome here. “

Knight News made several attempts to reach out to Lanza regarding Hanna’s allegations and the Facebook post, but have not received any response.

Before reaching out to Knight News, Hanna said he reached out to President Nick Larkins’ regarding this appointment; he did not respond. Hanna said this specific appointment concerns him because he believes that real diversity on college campuses should include diversity of thought.

“He should not be head of diversity. I do not care if someone equally as liberal as him takes the position. As long as it’s not someone who has been actively aggressive towards people who disagree with him,” Hanna said. “That is the antithesis of diversity. You can talk about diversity of skin color, religion, and sexuality all you want. But diversity of thought is a real thing too, and if you ’re just disregarding people who disagree with you, and you just want them off campus, what’s the point.”

Larkins did not respond to multiple requests for comment.

Lanza’s approval by the senate comes weeks after the rejection of the former College Republican Chairwoman, Karis Lockhart, for the Governmental Affairs position.

During Lockhart’s hearing, the senate questioned her on sanctuary campuses and whether or not she would be able to remain unbiased in this role. Lockhart’s hearing ended as senators began to discuss her “vibe” and how she made them feel uncomfortable. Lockhart was rejected with a vote count of 5 votes for, and 13 votes against.

Larkins told Knight News that he still believes the Lockhart is the “most qualified person on this campus” to be this position. But he explained that he would not be reappointing her because she does not have the votes, and she did not attempt to sway senators. Larkins’ went on to explain that he believes Lockhart’s poor senate hearing was the reason she was rejected; not because of her conservative values and past affiliation with the College Republicans.

Lockhart agrees that she is the most qualified person on this campus for the role. But she believes that the senate rejected her because she is a conservative. “When the first question of the hearing was are you going to disaffiliate, I knew where the tone of this hearing was going,” Lockhart said.

Knight News attempted to speak with several senators regarding Lockhart’s hearing but was either turned down or asked to set up official appointments at later dates.

Currently no one has filled the Governmental Affairs position.