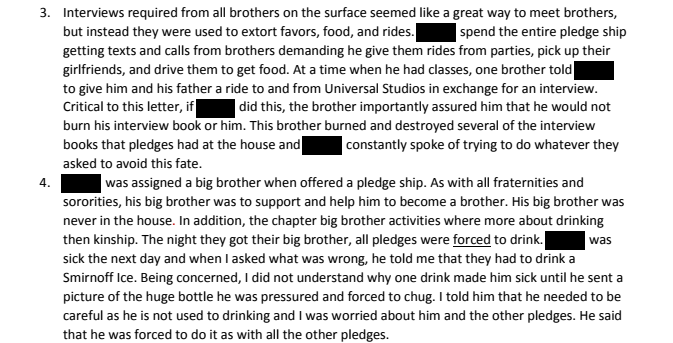 Beta Theta Pi has been suspended by the University of Central Florida after receiving emails accusing the fraternity of hazing and alcohol misconduct.

Multiple members of a pledge’s family wrote emails complaining Beta Theta Pi has been mistreating pledges. The emails accuse Beta of blackballing the pledge — expelling and cutting all ties with the pledge without rhyme or reason — right before the fraternity’s “hell week.”

The family also accused Beta Theta Pi of forcing the pledges to drink unreasonable amounts of alcohol. The email states the pledge “told me that they had to drink a Smirnoff Ice. Being concerned, I did not understand why one drink made him sick until he sent a picture of the huge bottle he was pressured and forced to chug.”

The family indicated the fraternity brothers were apparently threatening the student as well. “At a time when he had classes, one brother told [the pledge] to give him and his father a ride to and from Universal Studios in exchange for an interview. Critical to this letter, if he did this, the brother importantly assured him that he would not burn his interview book or him.”

These claims helped lead to the suspension of Beta, which UCF put in place on November 27, 2017 — just six days after UCF received the family’s letter. This “interim” suspension process has led to Beta Theta Pi missing out on their formal spring rush, as well as many other fundraising events.

We reached out to Beta Theta Pi but have not received a response. The fraternity has a scheduled hearing on February 16 which should determine whether or not the “interim” suspension will end.