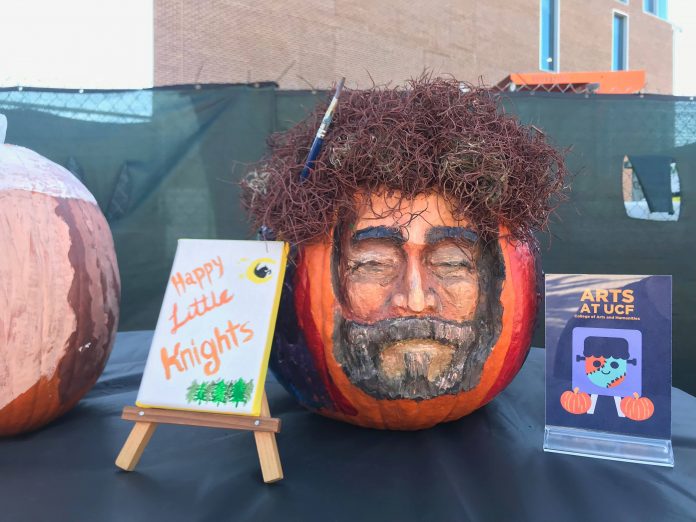 Ten teams gathered and carved – or painted – their ways through the annual Pumpkin Palooza held on Tuesday in front of the Student Union.

For the sixth year in a row, the Student Union’s marketing team hosted the event to help get students involved with Halloween on campus according to Senior Marketing Manager Shalom Gonzalez.

“The only thing that they needed to do to be able to participate was that the design had to be UCF themed,” Gonzalez, 24, said.

To join the competition, according to senior marketing major, students had to form teams between two to five members and had to be UCF students.

Student signed up for the event through a KnightConnect form provided on the Student Union’s Facebook page.

The team competed two years ago with a different lineup and a pumpkin carved with a math proof.

“We’re not here to win, we’re here to have a good time,” said Sanchez.

This year, the Gunch Bunch went for a more whimsical theme with images of Nicolas Cage screaming and a cat.

Voting for the winner took place on Wednesday until 2 p.m., where three quarter of the votes can from judges Mary Whittaker, Student Union Director Rick Falco and Student Body President Josh Bolona. The remaining points came from student votes.

The marketing team announced the winner of the competition was Arts at UCF, who carved and painted Bob Ross onto the pumpkin. They received two movie tickets each, Student Union hats and KIND bars.

The winning team, Arts at UCF, consisted of students Isabella Martinez, Elise Castillo, Kevin Mora and German Salazar. The back of the pumpkin was painted with a rainbow and had “Arts at UCF” carved into it. A time-lapsed video of the team carving the pumpkin was shared on UCF Student Union’s Facebook.