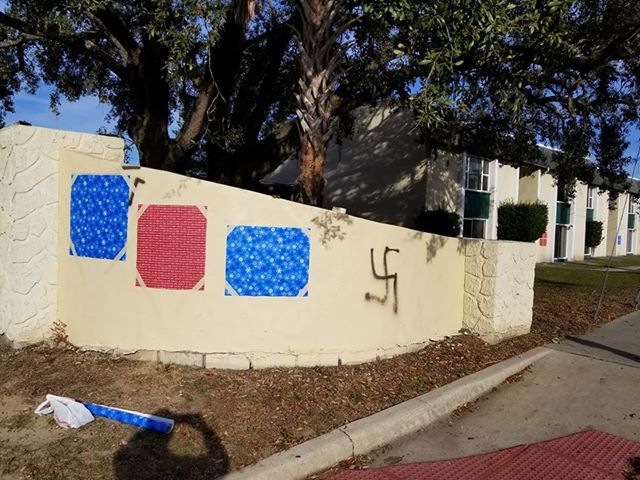 A UCF grad discovered swastikas painted on buildings and signs around UCF Christmas morning — and acted to cover up the hateful messages as quickly as she could so the hateful symbols wouldn’t ruin everyone’s day, her father told Knight News.

Advertisement
Chuck Peabody, and his UCF alum daughter, Mary Peabody, said they wanted to stop neighbors from waking up and seeing a hateful message on Christmas morning.

That desire “launched” the father and daughter team into sending a message of love instead — via “a lengthy project of covering them up with Christmas wrapping paper and a counter message,” Chuck Peabody said.

After Knight News asked Chuck Peabody if he had any photos, he shared several with Knight News. They are posted on the @UCFKnightNews Instagram.

His daughter, Mary Peadbody told Knight News: “Christmas is a time we celebrate the birth of our Lord and Savior. He is the best example we all have for peace and love. Hate is never right, but especially during the celebration of His birth. I hope we can all help turn the hate message around.”

The swastikas appeared on buildings — including a fraternity house — south of the University and Alafaya Trail intersection, on Solon Ave, according to WFTV.

“Orange County deputies would only say this is considered criminal mischief and that the case is under investigation,” according to WFTV.

The UCF fraternity house that was vandalized was Delta Sigma Phi, according to a tweet by Spectrum News Wildman.

Swastikas found spray painted on building up and down Alafaya along UCF this morning. @MyNews13 pic.twitter.com/QlNd8Sypn9

Knight News is working to find out more on this developing story.