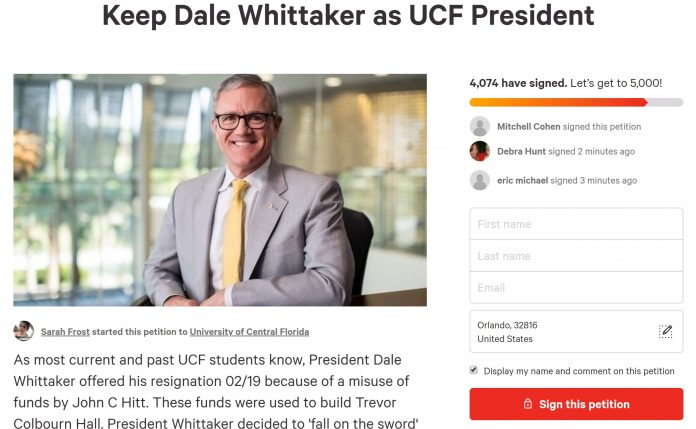 Students of the University of Central Florida have begun a petition to keep Dale Whittaker as president of UCF.

More than four thousand signatures have been recorded at the time of writing, which equates to 6% of the 2018 student population in less than 24 hours.

Whittaker offered his resignation to the Board of Trustees Tuesday afternoon amidst Colbourn Hall investigations, believing it to be the best choice for UCF to move forward.

Sarah Frost, a vocal supporter of the president, created the petition and outlined her goal on change.org:

As most current and past UCF students know, President Dale Whittaker offered his resignation 02/19 because of a misuse of funds by John C Hitt. These funds were used to build Trevor Colbourn Hall. President Whittaker decided to ‘fall on the sword’ so UCF can have a clean slate with Florida legislature. This petition is to try and bring to light the issue of President Whittaker taking the fall for another president’s actions.

There is a meeting on February 22nd at 10 am located at the Fairwinds Alumni Center where they will be deciding this fate. Please join us to show our support for President Whittaker, if you wish to speak please show up by 9 am to put your name on the list!

Comment to the UCF Board of Trustees will be open to the public – including students – Thursday, February 21 at 10 a.m. Anyone planning on making a comment, whether in person or through the phone, must sign up:

SPEAK OUT ON WHITTAKER BY PHONE:

To give the BOT live public comment on Whittaker’s resignation offer by phone, we found this form to email to UCF BEFORE tomorrow’s 10am meeting. https://t.co/uipZdYq3Pz