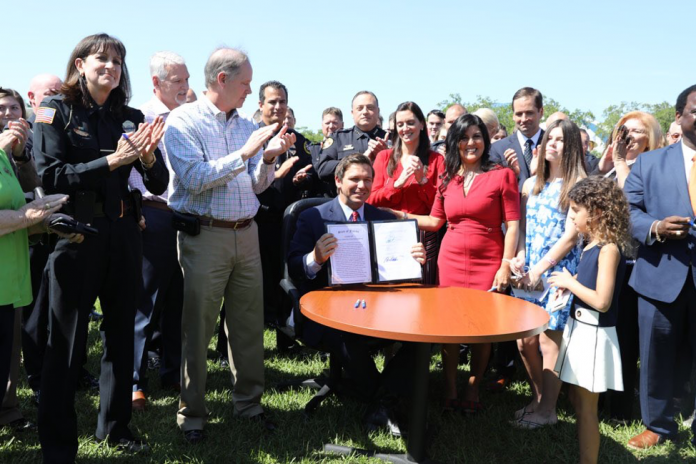 Florida joined the ranks of 43 other states on May 17 following the passage of CS/HB 107, a bill which elevates texting and driving from a secondary offense to a primary.

Beginning July 1, police can stop and issue citations to drivers solely on suspicion of texting.

According to the bill, texting includes any sort of communication methods that require manual entry, such as emails, instant messaging, or social media. The bill also bans any and all use of wireless communication devices in a handheld manner while operating a motor vehicle in a school or work zone.

While hands-free use remains legal, the bill does permit drivers to freely use devices while a vehicle is stationary and for drivers using a navigation device.

Roadway safety has long been a concern of the UCF community. Tragically, dozens have been hurt or killed on Alafaya Trail over the past decade. More recently, in January of this year, two pedestrians were struck by vehicles in a single week. While factors such as road design, high speeds, and alcohol are often attributed to accidents near campus, distracted driving has undoubtedly amplified the perils for drivers and pedestrians alike.

“Texting while driving is a dangerous but common practice at UCF,” said UCFPD Spokeswoman Courtney Gilmartin in an email. “We’re reviewing the new legislation to determine how it will support the department’s efforts to keep the UCF community.”

Texting and driving has been unlawful in Florida for quite some time, but only as a secondary offense. Under current law, a driver could only be cited for texting if they were stopped for a separate offense. The new measure, which grants authorities more power to combat distracted driving, is intended to improve roadway safety for pedestrians and drivers, prevent crashes related to distracted driving, and ultimately reduce damages to property and life, the bill states. It also aims to reduce health and automobile insurance rates related to car crashes.

“Throughout our state, we’ve seen far too many accidents where passengers are killed or severely injured as a result of distracted drivers,” Gov. Ron DeSantis said. “This bill gives law enforcement the ability to better enforce distractions behind the wheel.

CS/HB 107: Wireless Communications While Driving, passed overwhelmingly in both the House and Senate but not without scrutiny by some. Critics of the bill voiced concerns that the measure could be abused by police and weaponized against minority groups. Despite these concerns, the measure does include a provision requiring law enforcement to record and report the race and ethnicity of violators issued a citation to the Governor, House Speaker, and Senate president.

According to the bill, law enforcement officers who stop a vehicle under suspicion of texting and driving must inform the driver of their right to decline a search of their phone. The bill also bars police from accessing or confiscating a driver’s phone without a warrant.

“Consent to search a motor vehicle operator’s wireless communications device must be voluntary and unequivocal,” the bill states.

News 6 reports that a first offense can cost violators a $30 fine plus court fees, which can bring the total cost of a citation to $114.

Penalties increase in for second-time violators. According to an Orange County public information officer interviewed by News 6, a second citation within five years qualifies as a moving violation. Coupled with court fees, that can cost drivers $164.

Gilmartin added that roadway safety for drivers and pedestrians is a “top priority” for the department. Along with an increase on traffic enforcement, the department has made enhancements to roads and crosswalks to improve pedestrian and motorist safety, Gilmartin told Knight News.