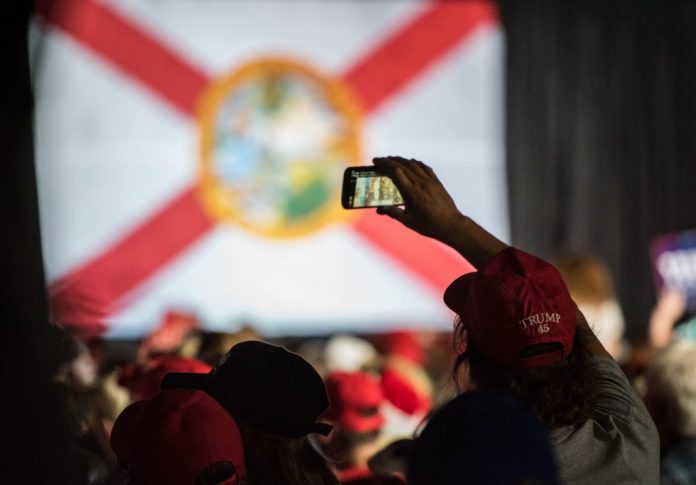 President Donald Trump took to Twitter Wednesday morning, showboating the high demand of his upcoming Orlando rally, a free event, which as of Wednesday morning had totaled a staggering 74,000 ticket requests, according to the president.

“Wow! Just got word that our June 18th, Tuesday, ANNOUNCEMENT in Orlando, Florida, already has 74,000 requests for a 20,000 seat Arena,” the president wrote. “With all of the big events that we have done, this ticket looks to be the “hottest” of them all. See you in Florida!”

The 74,000 tickets claimed for Tuesday’s rally far exceeds the Amway capacity of roughly 20,000. High attendance or at least the claim of high attendance, is not uncommon with the president’s campaign stops.

As a remedy, the rallies often feature outdoor broadcasts for overflow attendance – it is unclear if that will be available in Orlando. In an email to the Orlando Sentinel, Sgt. Eduardo Bernal and Police spokesman Cory Burkarth commented on the matter, clarifying that the decision to broadcast outside of the Amway ultimately rests with the campaign.

While details surrounding crowd sizes and overflow accommodations around the perimeter of Amway are yet to be made clear, one thing is certain: wherever President Trump goes, congestion and cost will follow. Just ask Palm Beach County, whose taxpayers received a refund of $5.6 million for security costs for 10 presidential visits in 2017 and 2018, the Sun Sentinel reported in April.

Cost aside, a presidential visit strains municipal manpower and resources. Shortly after the announcement of President Trump’s visit, Mayor Dyer opted to reschedule his State of the City address – the event was set to take place the same day at the Dr. Phillips Center.

“Presidential visits require significant logistical support from the City of Orlando including traffic management and safety,” city officials said in a statement. “To allow city staff to focus on this large-scale event, we have rescheduled the State of the City.”

The State of the City address is re-scheduled for Monday, June 24 at 10:30 a.m. at the Dr. Phillips Center for the Performing Arts and is open to the public.