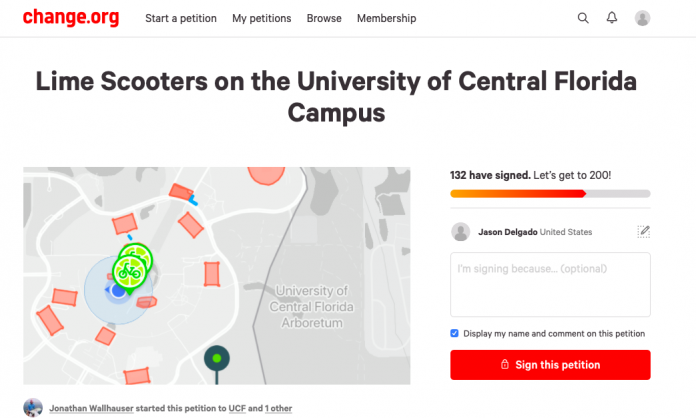 A petition advocating for Lime scooters in place of Lime bikes is making rounds on social media as students learn that Lime bikes have been removed from the UCF campus.

The week-old petition is a signal of support directed toward university officials and looks to nudge Lime toward the company’s next goal of an electric scooter fleet.

“This will become a major frustration for many students when they realize they will have to find another way to get to class on time,” the petition states. “Lime Scooters would be a simple, cheap, and fun solution to the transportation epidemic.”

The divorce between Lime Bikes and UCF follows as Lime reconsiders its union with many cities and campuses across the United States during its transition, according to an announcement by Lime.

“Based on strong interest in electric scooters, Lime is phasing out most of its bicycle options,” the announcement stated.

The bikes were removed on June 21, only weeks before the start of the Fall semester, and students are now having to re-think the way they get around on campus before school is in swing.

“I am upset, and when I pullup on my razor scooter, don’t laugh at me,” says TJ McLaughlin, a junior civil engineer student.

McLaughlin is not alone. His sentiment is shared by many who feel that traversing campus by foot is not only challenging but in Florida’s hotter months, nearly unbearable.

As a main-campus employee and film student, Pablo Indeca spends dawn to dusk walking around campus. He believes Lime Scooters would more than fill the shoes of Lime Bikes in the Florida heat.

“I have seen them in other cities, and it was nice for people who need to get from one-side to another in a hurry with less of a sweat,” Infante told Knight News.

While Lime services are no longer available on campus at the moment, students can rent a bicycle for free through the SGA Bike N Gold program.