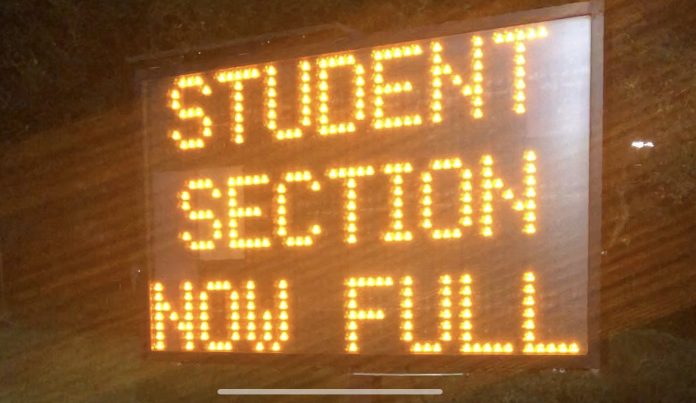 UCF Athletic Director Danny White took to Twitter Sunday evening to address concerns regarding the conditions students endured while waiting to gain entrance into the student section ahead of Saturday’s matchup against Stanford.

“We will work on a better experience for the best student section in America! Sorry that the heat was a problem yesterday,” White wrote.” Really appreciate the student support, & that y’all start lining up over 3 hours before kickoff. We can (and will) do better for y’all! More details to come.”

White’s words of reassurance come in wake of a tsunami of social media complaints and from parents, students, and the UCF community.

One doesn’t have to look far to find these conversations. Search no further than some of the more popular UCF community Facebook pages such as One Heartbeat or UCF Parents.

While each person’s account varies to a degree, most share a common theme: students standing in hours-long lines extending toward Burger U with no access to restrooms, water, and shade.

Others found themselves corralled onto the nearby soccer field while they awaited entry.

Yesterday’s daytime high was 90 degrees with 67 percent humidity, conditions which can quickly lead to heat-related injuries.

Some on social media criticized students for departing from the game early. But one user, who identified as a UCF faculty member, came to the defense of the students who left early by sharing their experiences while in line.

The faculty member wrote that a student of hers told her of several people who had passed out while waiting in line — or came close to passing out — and were subsequently looked at by emergency medical personal.

Another user posted onto a UCF community page to defend students and to share a personal bit about his daughter’s experience.

“I’m assuming that my daughter was not the only one that was affected by the heat after standing in line for hours. So her 3 friends, that she went to the game with, became concerned about her, and made the executive decision to take her home,” the father wrote.

The father added that his daughter was a big football fan and would have remained in the stadium for the whole game if the circumstances had been different.

Knight News will work to find out what changes will be coming to improve the process, as White suggested in his tweet.