Brown ⁠— a free agent who went undrafted in the 2019 NBA Draft, but spent time with the Orlando Magic in the NBA Summer League ⁠— was selected to play on the NBA G League Elite Team in the G League International Challenge, according to a UCF Athletics news release.

In the four years he spent with the Knights, Brown appeared in 116 games, averaging 4.1 points and 3.9 rebounds per game. He left his mark at UCF with the seventh most blocks in program history, swatting away 97 shots in his career, according to the UCF Athletics release. 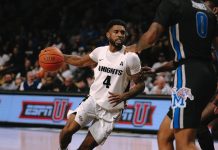