Sigma Chi at UCF will not be packing up the on-campus house it owns come May — the Office of Student Conduct removed the sanction in a Thursday appeal response letter.

In January, UCF’s chapter of Sigma Chi was found in violation of disruptive conduct and alcohol-related misconduct following a September 2019 incident at Knight Library.

The appeal was made on the grounds the sanctions were extraordinarily dispropriate to the violations, and that there were irregularities in fairness and stated procedures of the hearing that could have affected the outcome of the hearing.

Sigma Chi will be required to take down its logos, letters and images from the house as part of the organizational suspension for just the summer 2020 academic term.

The most notable changes in sanctions are listed below: 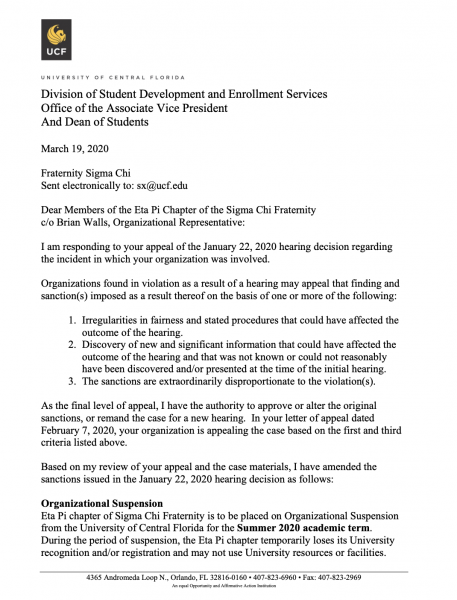 Knight News called UCF spokesman Mark Schlueb on Jan. 30 to ask for more information regarding the modified meaning of sanctions — proposed by the hearing officer on Dec. 17 — and no explanation as to why Director of the Office of Student Conduct Michael Gilmer is removing the fraternity from campus was provided.

“Following up on your question about the change in sanctions, there is no statement explaining the basis for a change in sanctions because the temporary loss of the use of the Sigma Chi house is not considered a sanction,” Schlueb said in a Jan. 30 email. “It is a clarification of the terms of the suspension. If you look at the previous sentence in the outcome letter, it reads: ‘During the period of suspension, the Eta Pi chapter temporarily loses its University recognition and/or registration and may not use University resources or facilities.”

THIS IS DEVELOPING. CHECK BACK FOR UPDATES.