The order is aimed to limit the spread of COVID-19 and will go into effect Friday at 12:01 a.m. and will remain in effect until April 30.

“There are 53 zip codes in Orange County, and on [the heat map], we have 38 zip codes that have at least one case within the zip code,” Demings said during the press conference.

Although UCF’s zip code is not among one of the most affected zip codes, Demings said he wants residents to know that the heat map can change daily, and all shaded areas are being affected.

“If your area does not look like a hot zone, don’t be deceived or misled that you don’t have to stay apart in order to stop this virus,” Demings said.

Florida reported 7,773 cases in the Wednesday evening update. By Thursday evening, an additional 1,235 cases were reported bringing the state total to 9,008 positive cases, according to the Florida Department of Health’s website.

By Thursday evening, Orange County reported 541 cases to the Department of Health — the county also reported five deaths and 77 hospitalizations, according to the dashboard.

“Orlando, we are strong,” Dyer said at the press conference. “Together as a community, we’ve experienced multiple hurricanes that had devastating effects, the tragedy at the Pulse nightclub which took 49 lives, and now the greatest pandemic we’ve seen in our lifetime.”

Demings and Dyer had previously announced a stay-at-home order for all of Orange County on March 24. The order went into effect on March 26 at 11 p.m.

“We’re pleased that the governor has now acted to extend a stay-at-home order to the rest of the state,” Dyer said. “We believe we acted timely and have saved lives just by taking that action last week.”

Pino listed seven cities in Orange County and the number of cases in each, as of Wednesday:

On Thursday, the same cities reported:

“Asymptomatic people are playing a role in the transmission of the disease more than we initially thought,” Pino said at the press conference.

“I’m gonna be doing an executive order today directing all Floridians to limit movements and personal interactions outside the home to only the necessary to obtain or provide essential services or conduct essential activities,” DeSantis said in a Wednesday press conference. 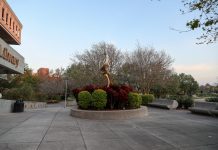