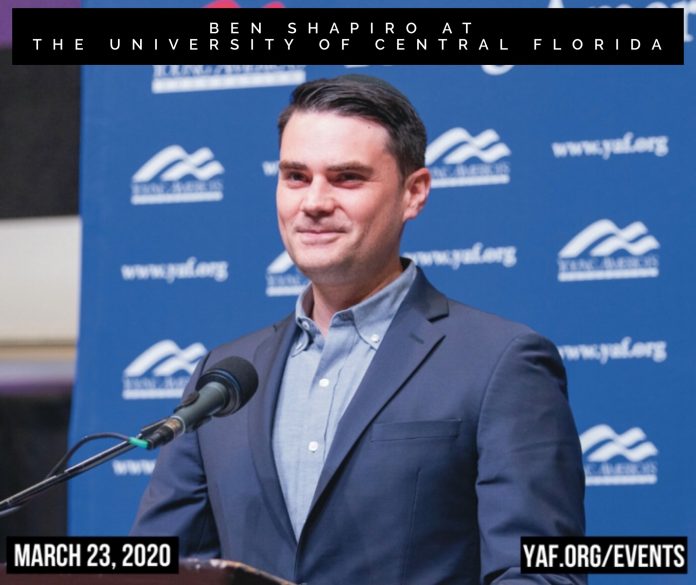 Ben Shapiro — the conservative commentator and editor-in-chief of the Daily Wire — is coming to UCF on March 23 and more information about the event has been made available.

“Thank you for your cooperation and we look forward to an engaging and enlightening lecture,” the statement reads.

College Democrats Director of Public Affairs Shahaan Khan said the organization is disappointed in the College Republicans’ request for student funds to bring Shapiro to campus.

Khan previously told Knight News the organization feels the College Republicans are asking a steep price for a speaker who does not embody the core values of this university.

“We hope the College [Republicans] have a safe and educational event and that they’re ready for everything that comes with Mr. Ben Shapiro,” Khan said.

The College Republicans are also fundraising for the organization. The top five donors will have a chance to meet Shapiro.

The funding bill created tension within the UCF community when the College Republicans at UCF asked the UCF Student Government Senate to fund half of the event using students’ activity and services fee fund.

The bill requesting the use of student funds to pay half the cost of Shapiro’s fee plus the fees for six UCF Police Department officers — totaling $17,875 — was approved on Feb. 13.

Each Registered Student Organization can request up to 3.25% of the total amount in the senate accounts budget in the 2019-2020 Activity and Service Fee Budget — this year, that amounts to $33,475.

When an RSO requests more than $1,500, the request for funds goes through a senate bill rather than a committee allocation, according to the SG website.

The bill was first introduced in a committee meeting on Feb. 5, where it passed favorably on its first reading.

The College Republicans first announced the event in January.

This is a developing story and may be updated with new information.

Updated ticked information and comments from the College Democrats have been added to this article.