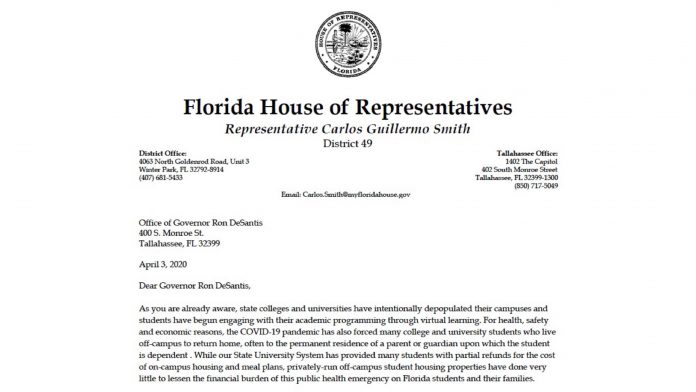 After UCF urged students to return to their permanent residences and refunded individuals in on-campus housing, a U.S. Congresswoman has joined alongside two state representatives fighting to help give off-campus students a chance against housing facilities that are providing minimal assistance during the coronavirus pandemic.

Smith and Eskamani wrote a joint letter and sent it to Florida Gov. Ron DeSantis on April 3 urging him to issue an executive order to provide relief to students stuck in off-campus housing leases.

Murphy said she reached out to DeSantis on her own, she told Knight News in a Monday email sent by Communications Director Jonathan Uriarte.

“I join with Reps. Eskamani and Smith to call on the Governor to help these families who are in this unique position through no fault of their own,” Murphy said in the Monday email sent by Uriarte.

Murphy said the pandemic has had an unprecedented disruption on students’ lives.

“As campuses close and students return home to be with their families and social distance, many can’t afford to pay rent on a home they aren’t using – especially during this economic crisis,” Murphy said in the email.

Murphy is the Congresswoman for Florida’s Seventh District in the U.S. House of Representatives. Her district includes all of Seminole County and much of northern Orange County, including downtown Orlando, Maitland, Winter Park, and the University of Central Florida, according to her website.

After UCF first introduced remote learning on March 11, the university asked students to return to their permanent residences due to COVID-19 and said it would be transitioning to remote learning through the end of spring on March 17. On Thursday, UCF announced all summer sessions will be delivered remotely, as well.

Knight News requested records to learn UCF’s plans regarding on-campus housing refunds after the university asked on-campus residents to vacate and then remained silent — UCF confirmed nearly $5.4 million would be returned to residents for the spring term during a Board of Trustees meeting on March 26.

“It’s shameful that these corporate apartments are taking advantage of college students during a pandemic,” Smith said in an email to Knight News. “UCF has already begun issuing housing refunds for students living on-campus. There’s no reason Knight’s Circle and others can’t do the same.”

Knight News created a Google Form asking questions to better understand each student’s situation and to understand how off-campus housing leases are currently affecting students. The form, which is still active, has been completed by 165 students so far.

Nearly 72% of students with leases in off-campus communities lost their jobs due to COVID-19 and about 86% of students reached out to their complex to discuss their concerns.

Approximately 56% of students’ parents or guarantors have lost their job due to the pandemic, according to the form. It should be noted that 164 individuals responded to this question.

“We must do everything we can to protect Floridians from unfair business practices during this pandemic,” the joint letter signed by Smith and Eskamani reads. “That includes our college and university students who are uniquely vulnerable to corporate exploitation that could further increase their further student loan debt in the future.”