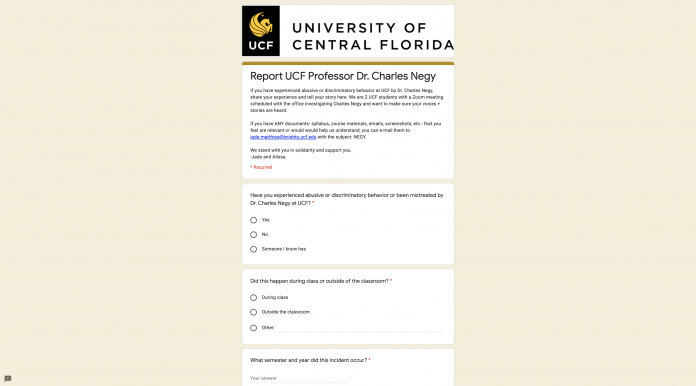 As UCF investigates associate psychology professor Charles Negy, two students are taking action and asking for the community to weigh in before they meet with the office investigating the professor.

Jade Matthies and Alissa Carmi are the individuals behind the Google Form that asks students who have taken a class with Negy to share their experiences. Matthies and Carmi said they persisted until the office investigating Negy committed to meeting with them over Zoom on Friday.

“If you have experienced abusive or discriminatory behavior at UCF by Dr. Charles Negy, share your experience and tell your story here,” the description of the Google Form reads. “We are 2 UCF students with a Zoom meeting scheduled with the office investigating Charles Negy and want to make sure your voices + stories are heard.”

The Google Form can be accessed here.

Carmi and Matthies said they have both taken classes with Negy and said they want to ensure all voices are heard.

Carmi, a senior interdisciplinary studies major with areas of concentration in health sciences, and social and behavioral sciences, said she hopes to be a community health worker. The 23-year-old said she wants to work with client populations of diverse cultural and racial communities in order to minimize the current health disparities in our country.

Matthies, who just graduated from the university, earned her degree in interdisciplinary studies with a concentration in communication, and social and behavioral sciences. The 23-year-old said her goal is to work for a nonprofit where she can serve others and fight injustice.

Matthies said students can help by sharing their experiences with Negy using the form — she said both she and Carmi will organize, and communicate all responses during the Zoom meeting on Friday.

“After seeing how many people have been negatively affected by Dr. Charles Negy’s discriminatory and inflammatory behavior in class as well as his hateful and ignorant words, I knew I had to take action for my fellow Knights,” Matthies said. “I contacted every department I could reach and persisted until I got a face-to-face [Zoom] meeting.”

When asked why she is asking students for help, Matthies listed the pillars of the UCF Creed.

“I believe that our University is at it’s best when we are united as a community that celebrates our diversity and embraces inclusion,” she said. “When someone within the UCF family doesn’t embody that, accountability and action must be taken so that all Knights feel safe and welcome on our campus and in our classrooms.”

Last week, UCF said in a news release that no employee may mistreat or discriminate against students in their classes or in any other setting, and no student should fear they will be treated differently because of others’ personal biases.

“We have been receiving complaints alleging bias and unfair treatment in Dr. Negy’s classroom and have launched an inquiry to gather more information,” the statement reads.

The university encourages members of the community to report concerns to UCF’s IntegrityLine, which also takes anonymous complaints, at www.ucfintegrityline.com or 855-877-6049.

Edit: This article has been updated to reflect the meeting Jade Matthies and Alissa Carmi have with the office investigating the professor has been moved from Wednesday to Friday.