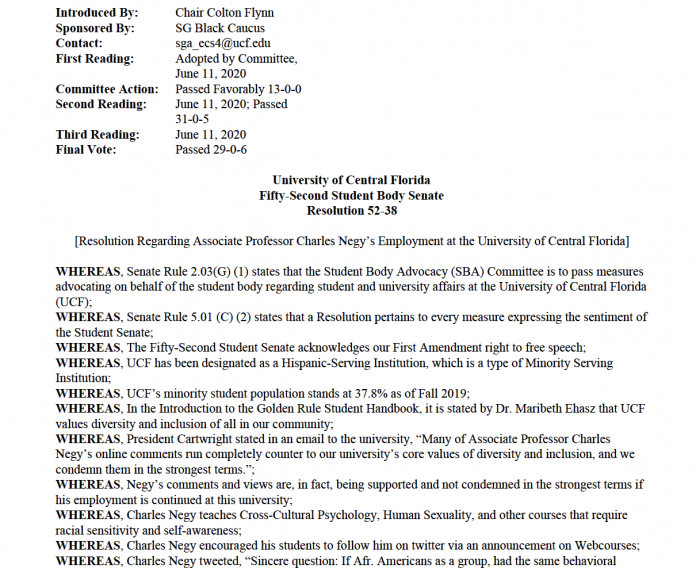 The resolution acknowledges the right to free speech under the First Amendment, but states Negy’s comments and views will be supported if not condemned and his employment is continued at UCF.

“We cannot expect our society to change for the better as long as these views are accepted and endorsed by the University by virtue of its inaction,” the resolution states.

“We support the Student Government Senate Resolution and condemn the actions of Professor Negy,” she said. “As the University is in the inquiry process, we highly suggest that students report any incidents or situations they have encountered with Professor Negy.”

UCF’s IntegrityLine, which also takes anonymous complaints, can be reached at www.ucfintegrityline.com or 855-877-6049.

The resolution was expedited in Thursday’s senate virtual meeting and passed favorably with a final vote count of 29-0-6.

The full resolution — Resolution 52-38 – Resolution Regarding Associate Professor Charles Negy’s Employment at the University of Central Florida — can be read here.

The resolution is sponsored by the Student Government Black Caucus.

UCF SG Senate President Fritz Farrow said the black caucus is made up of 11 members — 10 individuals in the legislative branch and one in the executive branch.

The senate’s resolution states Negy will no longer be able to facilitate conversations on the sensitive subjects in which he educates students on, and it will interfere with his functioning of his workplace.

The resolution states Negy’s comments perpetuate systemic racism and encourage discrimination and negative views towards the marginalized communities in which UCF educates and employs.

The resolution by senate — an opinion on measures advocating on behalf of the student body — calls for Negy to no longer employed at UCF.

In a news release, UCF said no employee may mistreat or discriminate against students in their classes or in any other setting, and no student should fear they will be treated differently because of others’ personal biases.

“We have been receiving complaints alleging bias and unfair treatment in Dr. Negy’s classroom and have launched an inquiry to gather more information,” the statement reads.

The university encourages members of the community to report concerns to UCF’s IntegrityLine, which also takes anonymous complaints, at www.ucfintegrityline.com or 855-877-6049.