The Delta Iota chapter of Zeta Beta Tau will be unveiled their signature spring philanthropy just before Spring Break on the University of Central Florida campus. The brothers of Zeta Beta Tau rolled out a giant, 6-foot ball throughout the campus to raise money for the Children’s Miracle Network.

Since the start of the semester, the brothers of Zeta Beta Tau have been working diligently to obtain sponsors for this event. Brothers who rolled the ball around the campus obtained signatures on the 6-foot ball. Sponsoring companies and organizations had their names painted on the ball anddonated a pre-determined amount of money to the Children’s Miracle Network for every signature obtained.

“It’s a great way to get our name out there and also give back to community at the same time. We feel honored to raise money for children’s hospitals throughout Central Florida. Hopefully this philanthropy will continue to grow and become one of the premiere events each year at UCF” said Jon Balva, External Vice President. This spring marks the first semester Zeta Beta Tau has ever put on the philanthropy since being recognized by the Interfraternity Council and receiving their national charter. In the past, Zeta Beta Tau has obtained over 5,000 signatures and raised thousands of dollars for the Children’s Miracle Network. Zeta Beta Tau hopes to build upon this and surpass these numbers not only this semester, but in future semesters to come.

Zeta Beta Tau rolled the ball mainly around the student union and library areas of the campus. Interested students simply grabbed a marker and signed the massive ball.

Additionally, Zeta Beta Tau has added a twist to their philanthropy this year; During the week, there was be a sign-in sheet for participating organizations so that at the end of the week, the organization with the most signatures would receive a bus rented out for an event of their choice, a $50 gift certificate to Greeks & More, and a brand new piece of silverware to add to their trophy collection.

The Delta Iota chapter of Zeta Beta Tau has been recognized by the Interfraternity Council for one year now and recognized by their nationals since the fall semester of 2009. Zeta Beta Tau seeks to foster and develop in its membership the tenets of its Credo: Intellectual Awareness, Social Responsibility, Integrity, and Brotherly Love in order to cultivate leadership within the University of Central Florida and Orlando community. 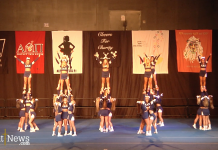