KnightNews.com shot video of controversial Imam Siraj Wahhaj giving a speech at the University of Central Florida in Orlando.

UCF’s Student Government Association allocated $1,250 to pay the imam’s travel expenses and speaking fees. It sparked a controversy on campus, because of the imam’s history of being named by a US Attorney as an unindicted co-conspirator in the 1993 World Trade Center terrorist attacks. 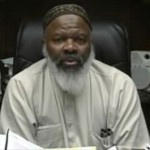 The Muslim Student Association hosted the event and invited the speaker. KnightNews.com conducted an exclusive interview with the president of MSA, who said the event was designed to create an open exchange of ideas and to dispel misconceptions of Islam.

Read our other story about how UCF police were deployed by university administrators to protect the imam and hold off the news media until the imam gave permission for them to bring cameras inside here.