Pastor Terry Jones of Gainesville, known for ordering the burning of a Koran, is out of Dearborn police custody after paying a $1 “peace” bond stemming from his attempt to protest at a Michigan mosque

But the court battle in Michigan, which resulted in an order forbidding him for protesting near the mosque, isn’t the pastor’s only problem tonight — the signs at his Gainesville church have been vandalized by someone who apparently didn’t like his message.

The signs originally said: “Islam is of the Devil.”

Someone scratched out those words and replaced them with: “Love all men.”

What do you think about the free speech issues at play here? Feel free to comment below. 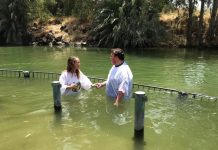