Oregon Offensive Coordinator Scott Frost will be officially introduced as the new head coach for UCF football after the school confirmed reports of his hiring on Tuesday.

“Scott’s success on the field and his ability to earn the trust and respect of his fellow coaches, players and recruits make him the ideal coach to lead our football program into the future,” UCF President John Hitt said in a statement. “UCF has a tradition of student-athlete academic success, and Scott has impressed me with his dedication to ensuring his student-athletes succeed in the classroom and on the field.”

Frost headed up the infamously fast Oregon offense for the last three seasons and was a key cog in developing Heisman winner and current NFL QB Marcus Mariota. The 40-year-old will become the tenth football head coach in school history and upon his introduction will be the tenth-youngest head coach in the NCAA.

“Scott is a winner and innovator who has directed one of college football’s most exciting offenses at the University of Oregon,” UCF athletic director Danny White said. “His attitude and experience are exactly what we need to ensure the Knights compete, and win, at the highest levels. I couldn’t be more excited to bring Scott and his fiancé, Ashley, to the UCF family.”

However, Frost should not be considered just an offensive guru as he spent time in Northern Iowa as their defensive coordinator in 2008. Frost’s hiring comes after speculation the Bowling Green head coach Dino Babers was closing in on the position although he had denied those claims.

UCF was ranked dead last in total offense and in the bottom three in the nation in scoring offense and the school hopes to answer those woes with this hiring. Frost’s hiring will mean a new offensive style for the Knights and most likely one that is the antithesis of the O’Leary years.

Scott Frost will be formally introduced at a press conference to the University of Central Florida and the media on Wednesday morning. 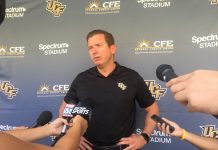 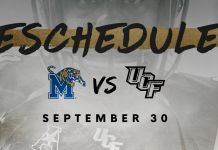 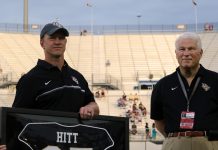