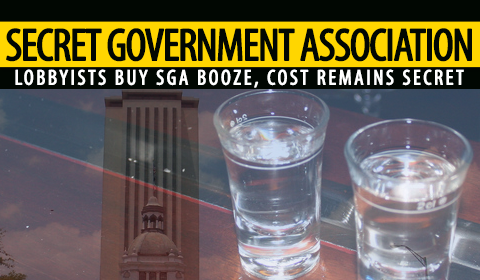 How did having an open bar at a lavish student government reception benefit the student body?

Zona’s SGA said that student money, or ASF funds, did not pay for the alcohol at the event, but that the SGA lobbyists did.

“Student Government (SGA) advisors are aware of this aspect of Day at the Capitol, although since the alcohol is provided by an outside organization, and not SGA, they are not required to sign off,” said a Zona administration spokesman.

While that might be true, it is a fact that those same lobbyists that were buying alcohol for students at the event are paid for by SGA funds, around $61,500 of student money, records show.

Normally student organizations have to jump through hoops to have alcohol at their events, but no forms were required to be signed off for SGA, according to a Zona administration spokesman.

While the alcohol might not have been paid for directly by ASF funds, the bartending services were coordinated through SGA and paid by the lobbyists that are paid by SGA, according to emails.

“Hello and Thank You so much for providing your respective services (catering and bartending) for our evening,” said Tyler Yeargain, SGA’s Lobbying Coordinator. “Unfortunately, we cannot pay for alcohol as we are funded by tuition fees. We will have a bartender paid for by our lobbying firm.”

There were two bars at the event and both were six feet long, according to SGA emails. Pictures of previous events where the same bartending company was contracted can be viewed here.

Knight News was told by a Zona administration spokesman that the servers were obligated to require proof of age to prevent underage drinking.

“In reference to your question regarding alcohol, in order to prevent underage drinking at the event servers were obligated to require proof of age (21) by anyone ordering alcoholic beverages,” said a Zona administration spokesman.

A source who was at the event told Knight News that they were not ID’d when ordering drinks at the open bar and that SGA leaders enjoyed shots, wine, beer, and mixed drinks.

A Zona administration spokesman also said that while alcohol is not a contractual obligation, it is a common practice at other lobbying events in Tallahassee.

Knight News asked for more details to support the position that alcohol is common at Tallahassee lobbying events, pointing out there was no alcohol at a First Amendment Foundation luncheon in Tallahassee with lawmakers and lobbyists.

We’re waiting to hear back from the Zona administration about how having alcohol at the event benefitted the student body.

Check back to Knight News for continued updates on this investigation.