Spring is here and things are beginning to look a lot brighter for Bostonians. With the skies opening up more and more every day, what more to look forward to than a beautiful outdoor festival? On Memorial Day weekend, falling on May 27 and lasting through the 29, Massachusetts very own Boston Calling biannual music festival will take the City Hall Plaza stages once again, calling upon residents and visitors alike to come together for they city’s favorite block party.

With over 20 musical and comedic performers, it’s important for attendees to catch esteemed performances. Here are the top five acts to see at Boston Calling’s 2016 music festival.

Born Sia Kate Isobelle Furler, the Australian singer-songwriter began her career in Crisp, a local Adelaide acid jazz band in the mid-90s. Finding her niche in the music industry wasn’t so easy and took a toll on her shy and withdrawn personality. Instead of relishing in her well-deserved spotlight, Sia found peace in establishing herself as a backroom songwriter for artists like Beyoncé, Rihanna, Britney Spears, Celine Dion, and Madonna. Known for her face-engulfing wigs and back-to-the-audience performances, Sia has managed to strike number one in several countries and receive nominations for the Golden Globe Awards and The Grammy’s. Through her eclectic acclaim of album 1000 Forms of Fear, featuring powerful songs like “Chandelier” and “Elastic Heart”; Sia has since released her latest album This Is Acting, which is full of rejected pop-oriented songs for artists like Adele and Katy Perry. Her playful concept of star power is precisely what sets her apart from the incalculable pack of artists attempting to create a movement, and is the exact reason her set should not be missed at Boston Calling on Friday, May 27.

Another Aussie act to catch is Melbourne-raised singer-songwriter Courtney Barnett, who offers one part conversational, deadpan delivery, two parts folk-pop style, and tops it all off with an original infusion of rock. Barnett writes the songs us millennials wish we could: the effortless, wordy, hazy songs about a day in the life of a girl who just can’t seem to win. She encapsulates everything extraordinarily ordinary in life and offers her listeners anything but the ordinary. Barnett’s latest album Sometimes I Sit and Think, and Sometimes I Just Sit offers a beautiful blend of the dirty grunge of the 90s and the mindless garage psychedelia of the 60s. With complicated, clever lines, her songs dance from thought to thought, providing ease to her listeners- it’s as if she is speaking directly to the individual blasting her music in their car on the way to yet another dreaded day of work. Without her words, the music would remain stagnant; without the music, Barnett would drift off like the end of her every day stray observations. Proving that life’s biggest moments blossom from the smallest places, Courtney Barnett’s set on Saturday, May 28 should be experienced by all.

Uniting members from America and New Zealand, Unknown Mortal Orchestra is composed of singer-songwriter/guitar player Ruban Nielson, bassist Jake Portrait, drummer Riley Geare, and keyboardist Quincy McCrary. Created by front man Ruban Nielson, UMO’S music can be best described as sifting through the sand of a boundless beach, revealing sparse hidden gems only to bury another. Though obvious in his lyrics, the crippling anxieties of heartbreak and polyamorous love are saturated and compressed by bursts of synthesizers and analog textures. UMO’s most recent album Multi-Love seems as if it could have been mixed and produced by both Frank Zappa and Giorgio Moroder with its intricate gestures, both lyrically and musically. Created and engineered entirely by Nielson himself, he finds a way of compressing pop styles into the raw and well-kept secrets deep within himself. UMO’s music has been seamlessly strung together by tiny, individual links creating a long, unbreakable chain of haunting moments, making it impossible for listeners to avoid on Sunday, May 29.

Delving into the comedic aspect of Boston Calling, Lamont Price was a perfect fit for the lineup as he is originally from Boston, MA and offers various secret comedic weapons. Though he had a quiet climb to the top, there is absolutely nothing quiet about him. He does not scream, and he does not yell but the audience knows when he’s on stage and will respond rousingly. While he did not have a notable breakthrough or pinnacle moment, he did not need one. Price worked his way to the top and he worked hard, earning well-deserved titles and accolades as the winner of the New York Underground Comedy Festival and one of Comedy Central’s “Comics to Watch”. With various awards and two films under his belt, Price offers a range of ever expanding comedic material that is both funny and personal. Whether by the Ford Stage on Saturday, May 28th or Sunday, May 29, Lamont Price’s set is one not to miss.

Referred to as a “pop culture maven” by the Boston Globe, Ken Reid is another Boston Native involved in both the music and comedy scene. Starting out in the punk rock group 30 Seconds Over Tokyo in the mid 90s, Reid opened for bands such as The Dropkick Murphys, Suicide Machines, The Unseen, Avail, and many more. In the early 2000s he became a Boston staple in the comedy scene with his unique and unparalleled storytelling about his personal life and beyond. Maintaining a loyal fan base, Reid now performs at various traditional comedy clubs around New England and has performed and hosted at the Lowell Comedy Festival, the Boston Music Awards, the HBO Aspen Comedy Festival, and held the title of Comic in Residence at The Comedy Studio just a few years back. Gut wrenchingly hilarious, Reid is always sure to take his audience on a fascinating, eye-opening journey through his bizarre life and is expected to draw massive crowds at the Ford Stage on Saturday, May 28 and Sunday, May 29.

For more information on the festival, visit the Boston Calling website. 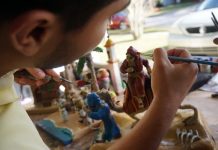