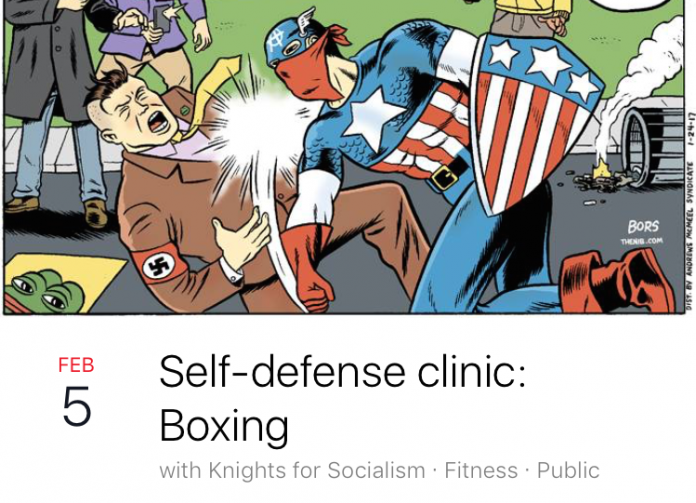 On Sunday, the University of Central Florida Knights for Socialism held an event titled “Self-Defense Clinic: Boxing“ to teach students to defend themselves and “BASH THE FASH,” under a Donald Trump presidency.

According to the Knights for Socialism event page, the clinic is being held “in response to the record number of hate crimes against Latinos, Immigrants, Muslims, Women, the LGBTQIA+ community, Jews, African Americans and other minorities since the rise of Donald Trump and other Alt-Right Neo-Nazis.” 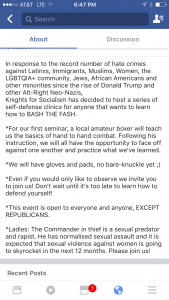 Chairman of the Knights for Socialism, Sophomore Dylan Tyer has stated that these events are crucial and that he himself has been threatened here at UCF.

“I have gotten threats [at UCF], I’ve been told I’d be shot by a right-wing death squad. I’ve been told as a protestor, as someone who organizes mass actions and protests that I should be run over, gas chambers, you name it. It’s absolutely disgusting; there are really people on this campus that are really honestly sociopaths,” Tyer said.

During the event, local amateur fighter Adrian taught the group how to properly throw a jab and followed by giving everyone a chance to put on a pair of boxing gloves and test their skills. Participants enjoyed the experience and felt that they really learned something.

“I think this is a useful skill to have. Like if you are out somewhere and someone tries to hurt you. But other then that I think its something to add to your repertoire,” freshman Physic student Joe Walsh sad.

Though this event was classified as a public event on Facebook, “This event is open to everyone and anyone, EXCEPT REPUBLICANS,” was written in the about section.

Conservatives at UCF expressed concern about being excluded from the event.

“I think the organization needs to revue the UCF Golden Rule if they want to continue to be an official organization on campus,” Chairwomen of the College Republicans Karis Lockhart said.

“Their exclusive and divisive language on their Facebook event goes against the UCF Golden Rule and what UCF stands for. The event goes further to prove that they do not want to have an educated discussion about the issues, as they much rather host an event that blatantly excludes fellow Knights that have a different politically ideology than them,” Lockhart said.

Tyer believes these concerns about Republicans being excluded are unwarranted.

“There are people who say in response to the rise of SJW’s (Social Justice Warrior’s) that they are going to start conceal carrying on campus, which is blatantly illegal. Thus, I don’t think any concerns about us are warranted,” Tyer said.