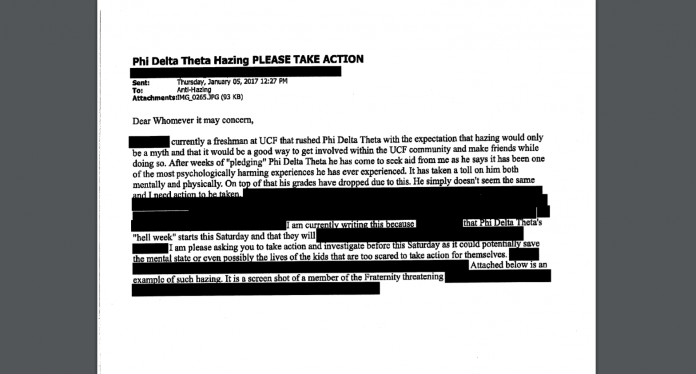 A hazing incident report received by the University of Central Florida, concerned for the well-being of a reported freshman, went without a response by UCF staff in charge of the hazing hotline for fifteen days after the report had been initially filed.

The emailed report dated January 5, 2017, 12:27 p.m. alleged imminent events that would have critically impacted a peer’s physical and mental state, among other concerns.

The complainant, whose identity or relationship to the student is unclear due to redactions by UCF, pleaded in the email with university officials to take action before that Saturday to protect and preserve the mental health – and alleged lives – of certain students from being “psychologically harmed” as part of a reported hazing ritual.

In the email, the complainant described the freshman’s expectation and account of recruitment that would allegedly take place around the turn of the New Year.

“[Redacted is] currently a freshman at UCF that rushed Phi Delta Theta with the expectation that hazing would only be a myth and that it would be a good way to get involved within the UCF community and make friends while doing so,” the complainant reported.

“After weeks of pledging Phi Delta Theta[,] he has come to seek aid from me as he says it has been one of the most psychologically harming experiences he has ever experienced. It has taken a toll on him both mentally and physically,” the complainant continued. 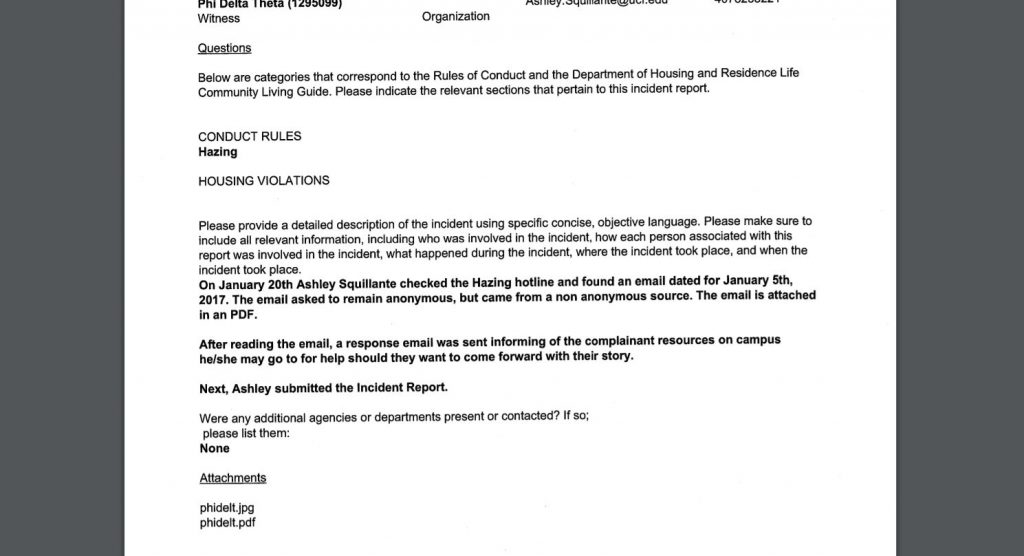 “On top of that[,] his grades have dropped due to this,” the complainant said in the email. “I am currently writing this because [redacted] that Phi Delta Theta’s ‘hell week’ starts this Saturday and that they will [redacted].”

“I am please asking you to take action and investigate before this Saturday as it could potentially save the mental state or even possibly the lives of the kids that are too scared to take action themselves,” the complainant went on.

After first reading the email about two weeks after that Saturday, a response message from UCF was sent to inform the student of the resources available should the student wish to come forward. An incident report moved the process once the response email went through.

In response to the alleged life-or-death claim and incident reporting form, UCF Director of the Office of Student Conduct Michael Gilmer issued a notice and mandatory hearing to Phi Delta Theta on the fifteenth day after the hazing report to the hotline.

With reference to the email received by UCF and its supporting documents, Gilmer enacted a summary action of: immediate suspension pending the outcome of the disciplinary case and a mandatory interim hearing scheduled for January 31, 2017, at 4 p.m. in the Office of Student Rights and Responsibilities Hearing Room. A full hearing on the charges of the case may be scheduled after the dated meeting, according to documents received by Knight News. UCF may choose to drop the charges without a hearing if there is insufficient evidence.

The evidence is unclear — at least to the public.

An attachment in the email report to the Hazing Hotline included a screenshot of a message thread involving alleged Phi Delta Theta members discussing a threatening event, according to the report. UCF refused to release an unredacted copy of that text message. 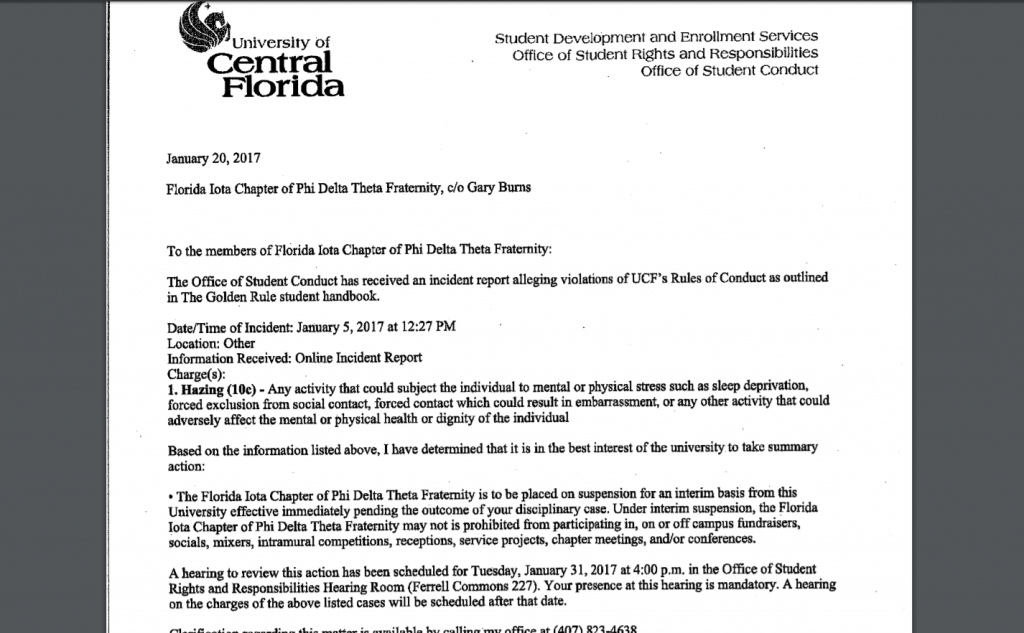 Knight News made public records requests to the University of Central Florida, backed by Florida law, on providing the supporting and corresponding documentation of the allegations in a timely manner. Acknowledgment emails to the university early Friday afternoon involved a continuous conversation went unanswered once a specified records request went through.

On January 14, 2017, at 3 a.m., an alleged incident involving a “heavily inebriated” student, under the suspected influence of alcohol, was reported on campus where the student attempted to pick a fight with their roommate after banging on multiple doors inside the apartment and insulting their roommate’s fraternity.

The inebriated student soon calmed down, in due part to their peers, although the students reported that the initial student in concern had come home under the influence previously in the past school year and that it had been an issue, according to the supporting document. A police agency was notified, according to the report.

It also appears from the records that the roommate who filed the incident report belonged to another fraternity. 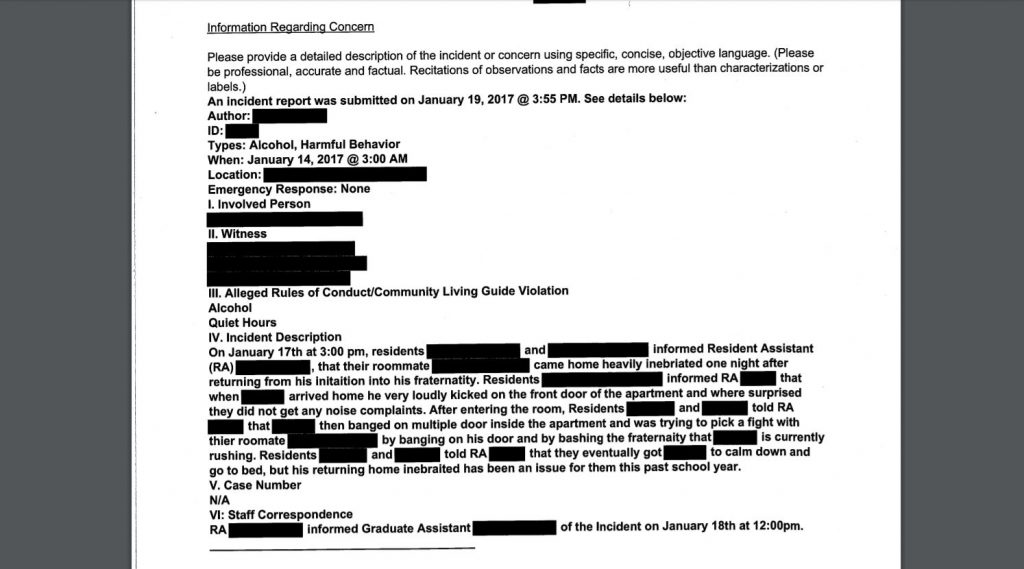 In a previous statement, the UCF Phi Delta Theta President, Gary Burns, enumerated to Knight News that safety remained an utmost priority in the how the organization runs.

“We are aware of the allegations that have placed our organization under investigation at this time,” Burns said. “We take all allegations seriously as the safety of our chapter, its members and the external community as a whole is our main priority.”

“We are working with UCF to obtain the specific allegations so we can investigate as thoroughly as possible.  I have already started my own internal investigation with the limited information regarding these allegations that I have received from UCF.”

Burns said to Knight News previously that no clear evidence has been shared with the Phi Delta Theta leadership thus far, although Phi Delta Theta will contribute to the investigative process involving UCF.

“So far I have found nothing to support any validity in the allegations. We will continue to work diligently with UCF officials, alumni and our general headquarters in an effort to solve this investigation.”

“In regards to the recent allegations being brought to light, our organization remains very concerned. There is absolutely NO reason any of our members should have at any point in time been in question of their mental, emotional or physical well being,” Burns said.

“I have personally sat down with each of our new members individually to see if at any point in time any brother put them in a position described as such. Still, I have found nothing to support these allegations. At no point in time were the lives of any of our members at stake.”

“In Phi Delta Theta’s eyes, hazing is the antithesis of the development of a man, and is counterproductive to our goals as an organization. We are still working diligently with UCF to resolve the situation,” Burns concluded. 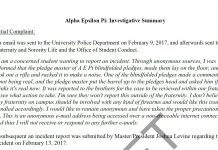