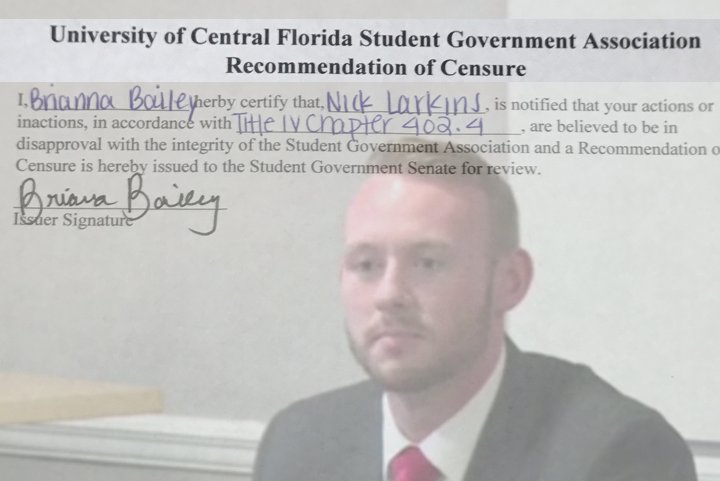 One day before University of Central Florida Presidential Elections polls open, SGA Sen. Brianna Bailey has filed a “Recommendation of Censure” against Presidential Candidate and current Chief of Staff, Nick Larkins, for not meeting his statutory mandated requirements.

In an email obtained by Knight News, Sen. Bailey notifies Chief of Staff Larkins and many other top student government officials of the censure in accordance with “Title IV Chapter 402.4.”

Title IV Chapter 402.4.states, “The Chief of Staff shall report updates to the senate on executive branch internal operations a minimum of two (2) times a month.” Sen. Bailey does not believe that Chief of Staff Larkins has fulfilled this requirement and therefore the “Recommendation of Censure” is appropriate.

“Report means come to senate and give us a verbal report of what is going on exactly,” Sen. Bailey said.

Bailey believes as a result of Larkins missing meetings, many important issues may have fallen through the cracks.

According to senate minutes from February 16, February 23, March 2, and March 9, Larkins was not present to give an update on the executive branch.

Larkins however, contested Sen. Bailey’s claim that he has not fulfilled his obligations as chief of staff.

“The hang up here is occurring on the word ‘attend,’ that word is not in Statutes. It says, ‘report to,'” Larkins told Knight News. “The most recent issue came because the speaker (Crystian Cepeda) did not read my report, which I sent from my SGA email to his, into the official minutes. If he deliberately chose not to report on my report, that is a failure on his end, not mine.”

Knight News reached out to Speaker Cepeda about whether or not he received any emails from Larkins regarding his report on the executive branch. Cepeda produced several emails to Knight News where Larkins asked Cepeda to preform the executive report on his behalf.

Speaker Cepeda told Knight News he does not believe it is his job to give the senate executive branch updates in place of Larkins. Speaker Cepeda also said he thinks Larkins is not fulfilling all of his statutory duties as chief of staff.

“I personally believe that if you are technically third in command and in the constitution it states that you must report to the senate and you don’t, then you aren’t completing, you are not fulfilling your duties,” Cepeda said. “My interpretation is you need to physically come to senate and give your report.”

Cepeda added: “It is not my job to write down the questions for your branch and report it to you. The chief of staff should be there to answer any questions the senate might have.”

Cepeda addressed being asked to be Larkins vice president, saying, “Yeah we spoke and I told him clearly that if he was to choose me as his candidate he would have to convince me to run because I have been here for a very long time, and I was planning to retire and I would need the reasons as to why I should stay.”

“He then came to my office and stated that I would not produce enough votes because I was not a female and then spoke to me about his experiences as chief of staff and if I was interested in the position. I stated firmly no because I need to dedicate my last year to my engineering studies and focus on getting an internship,” Cepeda continued.

It is currently unclear what will happen as a result of Sen. Bailey’s “Recommendation of Censure” against Chief of Staff Larkins.

According to IX: The Enforcement and Accountability Statutes, Chapter 911.2, “ The censured individual is open to student government penal action that may include, but is not limited to, cessation of pay, removal from appointed office under the discretion of the Student Body President (unless otherwise stated by the Student Body Statutes or Student Body Constitution), a vote of no confidence within leadership roles, or the removal from office through the impeachment process.”

During the debate on Friday, Larkins spoke briefly about how, if he is elected, the senate wont have to write legislation to make him attend, and how important visiting the senate is as president.

“The senate is currently working to pass legislation that would require the president to come to senate more often. Although he (Chris Clemente) is my boss, that does not free him from criticism. He hasn’t been going to senate, which is something that’s really important because you need to know what the other branch is doing,” Larkins said.

Larkins continued, “As the chief of staff, it’s written in statutes that twice a month I am supposed to go to senate and report on the duties of the executive branch. Because of the election, I have been sending those into the speaker to have him report. But once the elections over, and the campaigning is over, if elected then they’re not going to have to write legislation to keep me going to senate. They’re one of the three parts of our agency, so that’s something we need to stay on top of and that position needs to make sure they’re constantly going so they know what’s going on.”

See video of comments mentioned above: