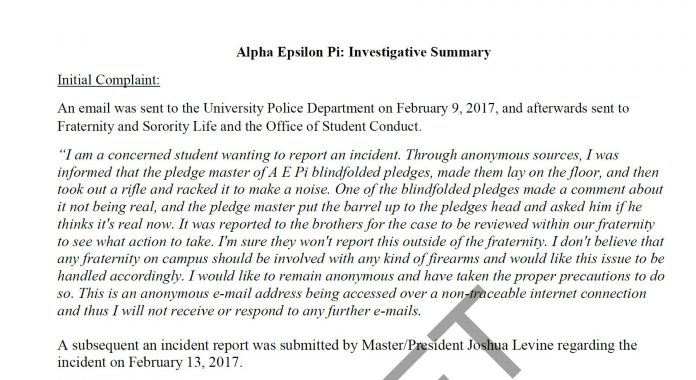 University of Central Florida investigators concluded that “a gun was introduced and placed on a pledge’s neck” by Alpha Epsilon Pi fraternity’s pledge master during a fraternity team building event, according to a newly released draft investigative report obtained by Knight News.

“Additionally, it is clear that the other members present were not aware of the gun being introduced prior to the incident,” the report’s summary continued.

The new record details emails and testimony from pledges and current members of Alpha Epsilon Pi about the incident first reported in an anonymous email to the UCF police department on February 9, 2017.

The original email to UCFPD said: “I am a concerned student wanting to report an incident. Through anonymous sources, I was informed that the pledge master of A E Pi blindfolded pledges, made them lay on the floor, and then took out a rifle and racked it to make a noise. One of the blindfolded pledges made a comment about it not being real, and the pledge master put the barrel up to the pledge(‘)s head and asked him if he thinks it’s real now. It was reported to the brothers for the case to be reviewed within our fraternity to see what action to take. I’m sure they won’t report this outside of the fraternity. I don’t believe that any fraternity on campus should be involved with any kind of firearms and would like this issue to be handled accordingly. I would like to remain anonymous and have taken the proper precautions to do so. This is an anonymous e-mail address being accessed by a non-traceable internet connection and thus I will not receive or respond to any further e-mails.”

Interview one with a current Alpha Epsilon Pi pledge detailed a team building activity used to get to know the brothers while the pledges learned about the chapter. While the activity in question took place, pledge one stated that none of the pledges felt threatened during the incident and activity.

Upon going to the pledge master’s house, the pledges were blindfolded, walked around, and brought to the backyard with the purpose of the blindfold to “feel disoriented,” according to the investigative summary.

Pledge one stated they heard the gun but did not know if it was real or not. The pledge noted the gun did not play a role in the activity taking place and that the gun “was there for a minute but then it was gone,” said the pledge.

Pledge one believed they were bonding in the middle of the forest and that the gun would protect them from wild animals, initially thinking the gun was an application on someone’s phone. Afterward, the pledges talked about high school and continued to hang out, but not in any formal means.

A current member of AEPi was interviewed by UCF for the second interview.

The current member stated that he arrived 20 minutes before the other brothers regarding the events leading up to the specific incident. He stated the pledges arrived and were blindfolded in the living room, and placed in a line, one by one, according to the report.

The pledges placed their hands on the shoulder of the pledge in front of them and were then guided to walk by a member of AEPi around a lake and to the backyard of the brother’s house.

They then stood in a circle, by instruction, and discussed each other’s time in high school and with family, etcetera, to ‘click’ with one another, the report said. The current pledge (interview two) stated he left 20 minutes into the event and did not witness the incident in question and added that no one knew that the pledge master had a gun.

The AEPi member told UCF that he did not learn of the incident until AEPi’s Judicial Board received a message about the pledge master possessing a weapon at the event. A meeting planned by the Judicial Board was canceled due to UCF’s interim suspension of the fraternity. The pledge master soon stepped down, according to the interview.

The UCF investigators made further observations and recommendations in the summary section of the report.

“Moreover, the incident was not immediately [reported] to the Office of Student Conduct or FSL until after the fraternity organized a means to address the concern internally. It should be further reviewed that the pledge who had the gun placed to his neck, was since removed by the organization by the initial recommendation of the pledge master,” the summary stated.

“Lastly, it is the recommendation from this investigation that all members present during the incident (in addition to those already noted in this report) be interviewed regarding their involvement in the incident,” the summary stated.

This is a breaking story. We are reviewing the record further and may update with additional information.