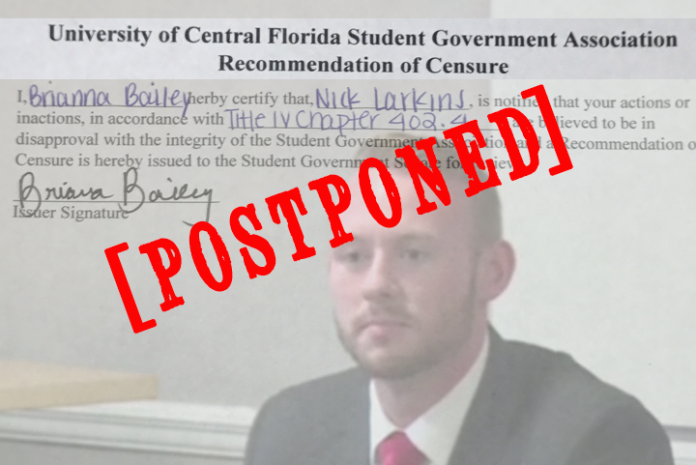 After over an hour of debate, SGA’s Legislative Judicial and Rules Committee unanimously voted to postpone voting on whether or not to advance the Recommendation of Censure against Chief of Staff Nick Larkins to the full senate floor until the committee’s next meeting.

The committee came to this conclusion based on Title IX: The Enforcement and Accountability Statues Chapter 910.1; which states, “Once issued to the Legislative, Judicial, and Rules (LJR) Committee Chair, the ‘Recommendation of Censure’ will be presented at least one week after reception, at the next regularly scheduled LJR Committee meeting. “

As Knight News previously reported, SGA Senator Brianna Bailey filed a Recommendation of Censure against Chief of Staff and Presidential Candidate Nick Larkins for not fulfilling his statutory requirements drawn out in 402.4. That statute states, “The Chief of Staff shall report updates to the senate on executive branch internal operations a minimum of two (2) times a month.”

After the meeting, Sen. Bailey said, “ I respect the committee’s decision to postpone, because I would like them to make an informed decision when interpreting the statute and decisions on the Recommendation.”

Senator Bailey went on to say she hopes the LJR committee members watch the live feeds and do their own research prior to next week’s meeting.

“During my presentation it was clear that none of the committee members have watched the live feeds so I would prefer for them to know confidently when voting rather than simply believing me and my research,” Bailey continued.

During the hearing, many different issues regarding the statue and the Recommendation of Censure were discussed in detail. One of the main issues was in regards to the rationale of Sen. Bailey. Some members believed the rationale had to run parallel to the censure. While other members believed that as long as the right statue was cited, LJR has a responsibility to investigate.

LJR committee member, Sen. Jacob Milich (who is in the same fraternity as Presidential candidate Josh Boloña) said, “I thought there were a lot of different factors at play, that is why I wanted to postpone it and not push it through, because it wasn’t clear. The censure wasn’t written perfectly and we all recognized that so it’s our responsibility as LJR to slow down and make sure we do this correctly.”

During the meeting, Attorney General Josh Winograd’s opinion on the term “report to” was brought into discussion. Attorney General Winograd wrote this opinion after Knight News inquired about the term Sunday night. As previously reported, Chief of Staff Larkins believes this entire issue revolves around that phrase.

In his official opinion, Attorney General Winograd wrote, “Section 402.4 of Title IV does not contain specific language on how the report shall be given, therefore it is up to the discretion of the Chief of Staff to report updates by the position’s preference. Unlike in Section 402.4, elsewhere within the Constitution and Statues of the Student Body when reports are statutorily required to be submitted orally, it is explicitly stated through the usage of the terms ‘address’ or ‘oral’. In absence of a definition within Statues of the term ‘report’, Black’s Law Dictionary supports that a report can be ‘formal oral or written’. Considering that Section 402.4 is a recent addition to Title IV, if the intentions of the Legislature were to have the Chief of Staff’s reports given orally, it should have been explicitly stated. Without the expressed language of a statutory requirement for the reports to be oral, the Black’s Law Definition must be used for interpretation which clearly allows for reports to be oral or written.”

According to this official opinion, Chief of Staff Larkins had the right to choose whether or not he wanted to report to the senate in person or submit written reports.

It is important to note that Chief of Staff Larkins and Attorney General Winograd are both brothers of the Sigma Pi Fraternity at the University of Central Florida. At the debate Friday night, Presidential Candidate Larkins called out Knight News Reporter Jake Hood saying that Hood covering the election raised “ethical issues” because Hood and Presidential Candidate Joshua Boloña are both brothers of Phi Delta Theta. Based on Larkins’ own comments, it would appear, by that same standard, that he must also believe that his Sigma Pi brother writing opinions on issues that impact his campaign may also raise the same “ethical issues.”

Knight News reached out to Winograd this afternoon asking if he thinks there is a conflict of interest but has not immediately heard back.

However, some senators believe the phrase “report to” is not the issue, but rather, the issue pertains to whether what Chief of Staff Larkins submitted to Speaker Cepeda was considered a report “to the Senate” as stated in 402.4.

“Given that it’s Black’s Law Dictionary, and that’s what we go off, yes that is correct, it’s oral or written. But that’s not the issue; the issue is did he even report. Does what he did even count as a report to the senate as that statue states,” Murphy said.

When asked to elaborate on whether or not Larkins report counts as a report to the senate, Murphy stated, “I do not believe so, with such a short time span, and as cited, the speaker’s job is not to be reporting to the senate what cabinet members are (doing).”