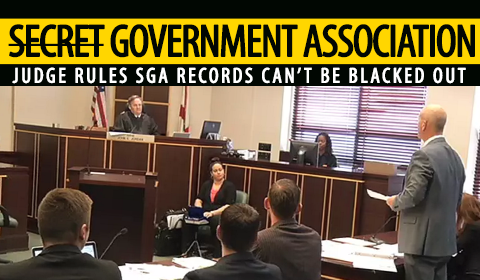 The Fifth District Court of Appeal ruled Tuesday that the University of Central Florida violated Florida law by covering up its Student Government Association’s spending controversies.

“Today’s unanimous decision from the Fifth District reaffirmed the trial court’s well-reasoned ruling that student governments in the State of Florida do not get to spend the public’s money in the shadows. Their records are not secret ‘education records,’ and even if they were, the involved students waive privacy protections by running for public office,” said Knight News attorney Justin Hemlepp.

Knight News reported on this story in August of 2016 when UCF hid the names of Student Government officials using student fees in official documents released to the public.

The controversy began early 2016 when Knight News submitted a request for documents relating to the expenditure of the Activity and Service Fee, a fee that every student pays as part of his or her tuition. The Student Government Senate decides how the $18.6 million Activity and Service Fee is allocated to different registered student organizations.

Over a month passed without receiving the budgetary documents from UCF. Knight News then filed a lawsuit accusing the University of not providing the public records within a timely manner. A few days after the lawsuit was filed, the University sent versions of the documents which redacted the names of student government officers spending student money to lobby in Tallahassee, Fla. among other items.

UCF’s lawyers then appealed and brought the case to Daytona Beach to the Fifth DCA. They would lose their argument in Daytona Beach.

“Here, this Court is tasked with determining whether [there are] alleged sufficient facts to denote a clear legal right to un-redacted copies of the Budget Request forms and A&S Fee Database records. This court finds that it has,” Judge Jordan wrote in the ruling that was affirmed by the Fifth District.

“A citizen’s access to public records is a fundamental constitutional right in Florida […] Here, the requested information – records reflecting the spending habits of the student government – even assuming they directly relate to the students whose names were redacted, are not maintained by the university in the manner contemplated by FERPA of education records.”

Knight News recorded much of both sides of the argument in the courtroom, available below:

Knight News has reached out to the UCF Board of Trustees Chair for comment about whether the Board will take a greater role in determining what lawsuits are worthy of appeal.