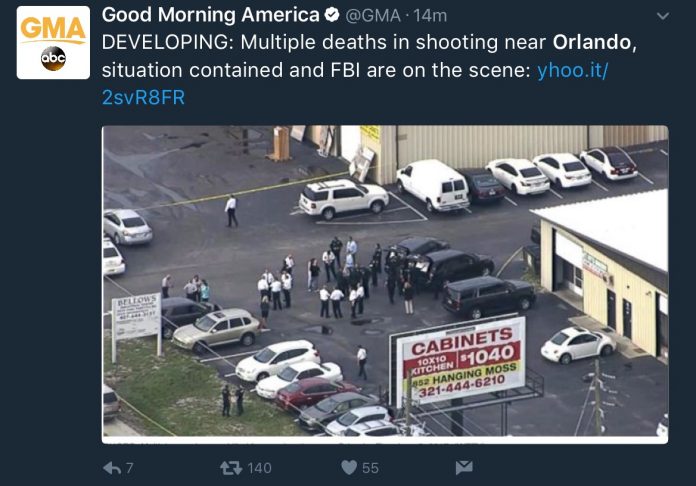 FBI investigators have arrived at the scene of a reported workplace shooting involving the death of five in Orlando, according to multiple news outlets.

The shooting took place off of Forsyth Road and Hanging Moss Road, near Full Sail University and fifteen minutes from UCF, and has been contained. The FBI reports that terror is not suspected. Reports describe a disgruntled worker opening fire, according to the Daily Mail.

FBI says shooting was not terror; 5 dead. Reports of a disgruntled worker opening fire inside a warehouse https://t.co/5qpT9rOLyU

The University of Central Florida Police Department advises students to stay away from University Blvd. and Forsyth Road.

FYI Knights. Avoid Forsyth and University. We are monitoring the situation. https://t.co/RrWoGLbsvZ

Orange County Sheriff Jerry Demmings spoke to media Monday morning, describing the scene. Three males and one female were shot dead on the scene. A fifth victim, male, died at the hospital and the suspect later turned the gun on himself.

The suspect was fired from the worldwide service industrial warehouse in April. The Orange County Sheriff’s Office disclosed that deputies responded to an aggravated assault once at the location.

FBI is on scene near shooting on Forsyth, near Full Sail University #UCF

“Unfortunately, we have seen these situations play out in this community and around the nation,” Orange County Mayor Theresa Jacobs said.

“One thing we know about Central Florida is that we have a community that cares and has shown that compassion time and time again.”

This is a breaking story.