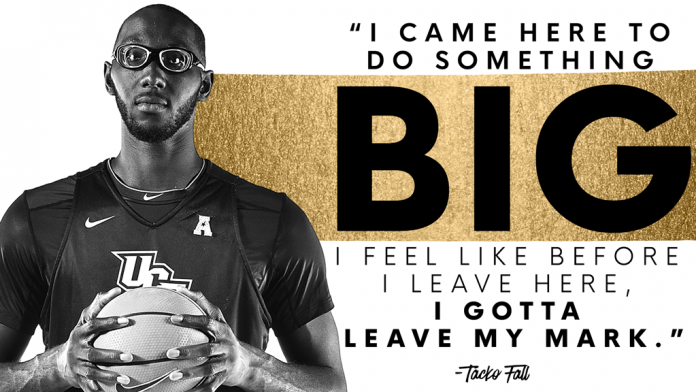 UCF Basketball’s Tacko Fall announced Wednesday that he will not declare for the NBA Draft this Summer.

Fall intends to return for a final season as UCF’s star center with a wish to leave a legacy.

“It left a feeling of unfinished business,” Fall said to UCF of the injury-plagued 2017-18 campaign. “This is not the way I want to leave this school. I came here to do something big. I feel like before I leave here, I gotta leave my mark. That’s what really weighed into my decision to stay.”

Fall announced last year almost to the day that he was entering the draft to scope opportunities. The center worked out with five teams although withdrew to return for his junior year.

UCF suffered from numerous injuries to key players such as Aubrey Dawkins, B.J. Taylor, and Fall himself.

“We had everything we needed. We had all the pieces. Unfortunately, we got hit by injuries,” Fall said. “Things happened that I couldn’t control. Having all those injuries really changed everything.

“They say you learn a lot from those kinds of things and I did,” he went on to say about how this past season ended. “I thought about a lot of things, and it was depressing at first, but I had the right group of people around me, helping me through it. Orlando’s like my second home. The way this year ended. The way our season ended. The way that my season ended. I just didn’t want to leave the school like that.”