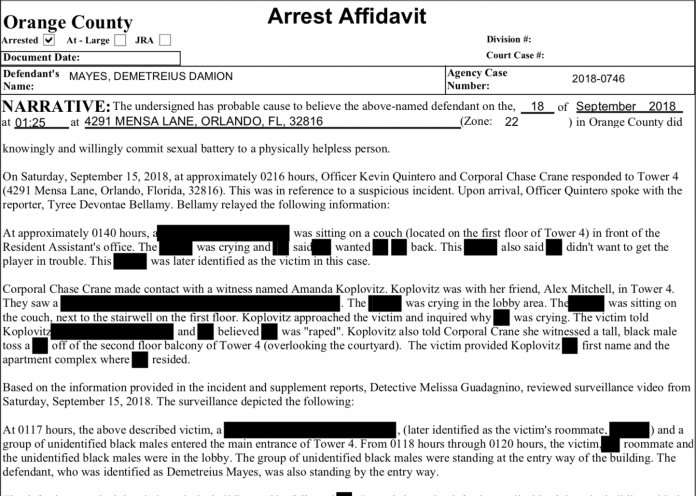 A University of Central Florida linebacker was arrested late Tuesday on charges of sexual battery, according to the arrest affidavit.

As Knight New previously reported, Demetrius Mayes, a freshman for the UCF football team is being held without bond in the Orange County jail after he was accused of raping an intoxicated victim in his Towers 4 bedroom on campus, according to his arrest affidavit. 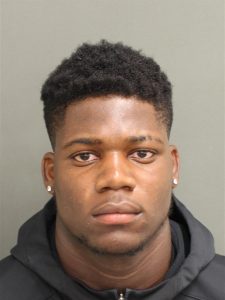 Mayes has been suspended indefinitely from all UCF football-related activities by UCF Head Coach Josh Heupel in light of these allegations.

“You try to educate your players throughout the entire year about different situations or positions that they could potentially put themselves in and put them in a positive place and make sure that the people around them are in positive places, Heupel said following news of the incident.”

Seven of Mayes’ teammates said they attempted to stop him from making what they thought was a “big mistake,” according to the arrest affidavit. The players said they believe Mayes and the victim went to his room. According to the report, Mayes’s teammates went to his room and knocked on the door, but it was locked. The players continuously knocked on the locked door while advising not him to have sex. The players said the victim walked out of Mayes room after several minutes crying.

When asked about the other players who were trying to stop Mayes Heupel said: “I think we have quality young men in our program, that try to do the right thing not for their teammate but for people in general.”

UCF Police Chief Carl Metzger released a statement today on the accusation, “The UCF Police Department is committed to a thorough, professional investigation of all criminal incident reported to us, and we’re dedicated to a culture of care that starts by believing the brave survivors who seek our assistance. This survivor’s well-being will continue to be a priority for our department and our university.”

“I am proud of the officers and detectives who dedicated themselves to this case. I also appreciate the actions of the bystanders to this incident who stepped up to help someone in need; they set an example of compassion and consideration that we all should strive for.”

Heupel said this is something that is talked about with the players.

“You have programs, you have people come in something that you talk about when they have extra time off.  It’s the last thing you mention before they walk out the door as well,” said Heupel.

Questions about this incident were eventually cut off during the press conference with Heupel.

Knight News has reached out to UCF President Dale Whitaker and Athletic Director Danny White for comment but has not heard back at the time of writing.

This is a developing story, stay tuned for updates.