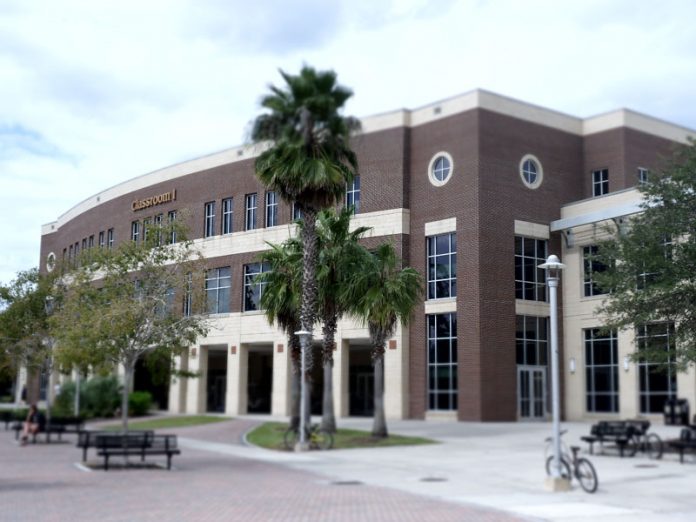 A University of Central Florida student was detained by police early Tuesday afternoon after officers received a 911 call for a suspicious person in Classroom Building 1, according to UCF PD.

Chief Carl Metzger briefed the media shortly after and confirmed the incident. The student arrived at their Constitutional Law 2 class in a “Terminator” Halloween costume with live shotgun shells on a bandolier, a shoulder-belt loop with notches for cartridges, which led to the call.

While it is not illegal to have ammunition on campus, the student was taken to UCF PD and interviewed by detectives, according to Metzger, who also characterized the action as “poor taste.” The student was released after police determined there was no threat to campus.

Police responded with a handful of cruisers to the building, however, the scene was tame. UCF PD walked the building floors while other officers waited outside.

The suspicious person has been arrested without conflict, according to a student who live-streamed the response. Police cleared out. We will report when more information is available #UCF

A student in the Constitutional Law 2 class reported to Knight News that the person is in the university’s ROTC program and frequently attends class in uniform.

Another student in the class, who did not want their name revealed with the incident described the moment when officers stormed the classroom:

“We were ironically talking about due process. The differences between procedural and substantive due process. All of a sudden 5 officers rush into the classroom. Covering both doors. 1 officer from the far left door and 4 from the right door,” the student said.

“One was armed with an assault rifle. They instructed the students to stay calm and approached ‘Terminator.’ Asked him to slowly raise his hand. One of the officers grabbed his bag and the other officer handcuffed him. The officer that handcuffed him asked if he came into the class with anything else and asked the students if he’s said anything disturbing or weird.”

“‘Terminator’ commented ‘Bad costume choice… I guess.’ They walked him out and one of the officers asked the professor what time the class ended. Towards the end of class the officers requested that the students who sat around him stay behind and write a statement,” the student told Knight News.

The suspicious person was detained without conflict. No criminal offenses will be held against the student but the Office of Student Conduct may be involved, Metzger said in the media availability.