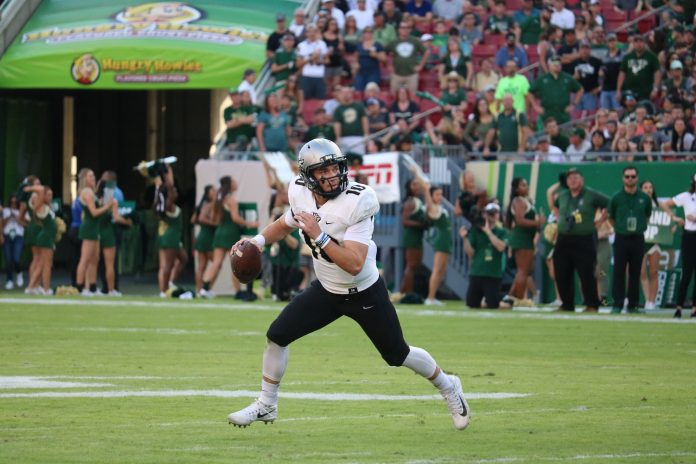 Milton’s right knee dislocated during the second quarter of the UCF-USF football game, according to Tampa’s WTSP, and the quarterback’s knee was popped back into place by doctors.

Here’s what I know regarding #UCF’s McKenzie Milton. Early indication was its a dislocated knee, which cut off blood circulation. They did pop his knee back in place and doctors are with him. No confirmation of surgery, but he is at the hospital.

An NFL doctor expanded on Twitter the type of injury that took place, stating emergency surgery would be needed to restore blood flow before permanent muscle damage formed, typically a few hours after the injury occurs.

This situation is similar to #ZachMiller @ChicagoBears.
Undoubtedly emergency surgery to restore blood flow as permanent muscle damage occurs within hours if circulation not restored. https://t.co/bISj8JsEk9

Dislocated knee confirmed.
Likely emergency surgery to “save” his leg comes next as artery likely disrupted. This is a #ZachMiller @ChicagoBears situation. Wish this athlete the best but any @NFL dreams are likely over. https://t.co/eHcbYaJiGA

The Knights went on to score four more touchdowns and a field goal to win the War on I-4 and claim another perfect season. Greg McCrae accounted for three touchdowns.

Memphis will travel to Orlando on Saturday, December 1 for the AAC Championship.