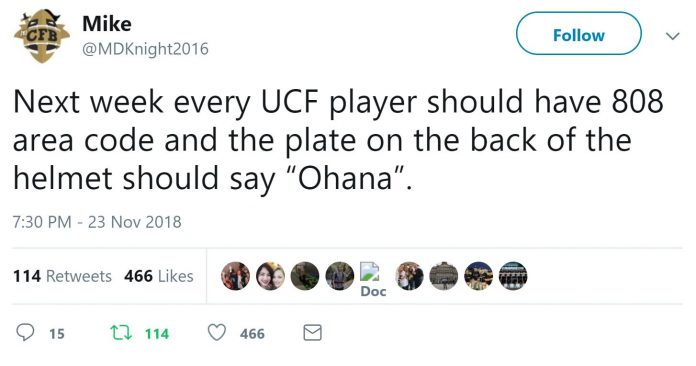 University of Central Florida fans quickly took to social media to support quarterback McKenzie Milton and the rest of the team with one fan, among others, suggesting to UCF Football that they honor Milton with the “808” area code and “Ohana” on the back of Saturday’s championship helmets.

Next week every UCF player should have 808 area code and the plate on the back of the helmet should say “Ohana”.

The 808 area code belongs to the Hawaiian Islands of which Milton proudly represented over the years with UCF football.

Another fan tweeted an idea that circulated involving fans wearing Hawaiian leis to Saturday’s game. A reply to that tweet came from someone who ordered 75 leis to arrive on Thursday. The UCF bookstore sell’s leis as does Amazon, and nearby oriental trade shops.

Someone just tweeted that we should all wear a lei next game in honor of McKenzie Milton. I love that idea.

If you like please retweet and let’s make it happen.@UCFDannyWhite

I ordered 75 from Oriental Trading and they are due to arrive on Thursday.

The Knights will host Memphis once again in the AAC Championship Saturday at 3:30 p.m.

At next Saturday's AAC Championsip game, how should Knight Nation honor Milton?: