KnightNews.com
Home News UCF moves up to No. 7 in AP, Coaches Poll after USF... 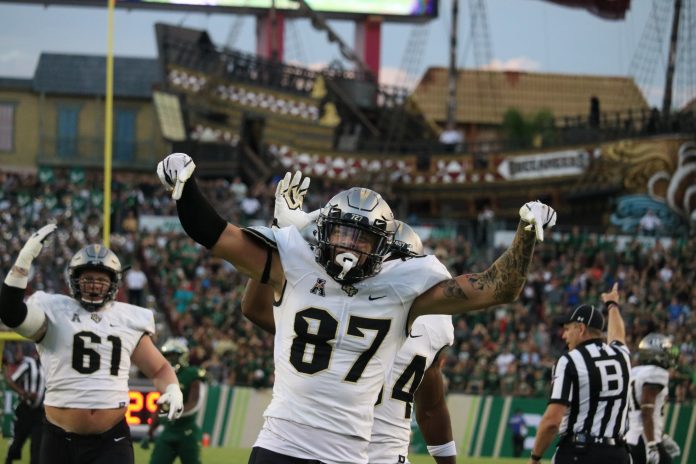 The Associated Press and Coaches Poll moved the University of Central Florida to No. 7 after rivalry week and a 38-10 win over USF on the road.

Quarterback McKenzie Milton suffered a devasting knee injury in the second quarter which led to Darriel Mack, Jr. taking the helm and finishing what Milton started. The score was 7-0 at the time of injury, and under pressure, Mack, Jr. ensured that four more touchdowns and a field goal with the help of Greg McCrae (3 TD) made the scoreboard.

#BREAKING: UCF jumps up 2 spots to No. 7 in the Coaches Poll — ahead of Michigan! pic.twitter.com/nqbWAjcBSZ

Ohio State moved up to No. 6 after handling No. 4 Michigan 62-39. Oklahoma moved up one spot, due to Michigan’s fall, after narrowly defeating No. 13 West Virginia 59-56.

Michigan held a spot in the top-four and the College Football Playoffs. Now the Knights have a better shot at stealing the fourth CFP spot than the Wolverines.

The best-case scenario for UCF involves Ohio State and Oklahoma losing on Saturday, as well as Georgia to Alabama and Memphis to UCF (by a wide margin). Theoretically, the Knights couldn’t be left out of the playoffs.