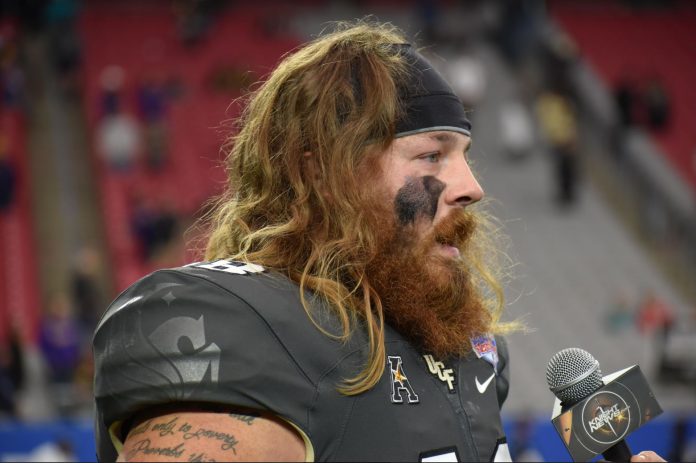 UCF punter Mac Loudermilk shaved his beard Tuesday night, the first phase of a promise he made prior to the Fiesta Bowl.

Loudermilk announced back in early December that he would be cutting his hair sometime early in the new year and donating it to Locks of Love, a public non-profit organization that provides hairpieces to financially disadvantaged children suffering from long-term medical hair loss from any diagnosis.

He posted a video on social media as he parted ways with his beloved beard.

The beard is coming off https://t.co/2PZ7qsiY7e

Next to go: his lion’s mane. Loudermilk said he plans to chop off the rest of his hair on Friday.

“I chose to do it because I had two family members go through cancer treatments and they both lost their hair and became a shell of who they used to be,” Loudermilk said. “So, for me, it an easy choice. I can always grow my hair back out if I chose to, but the kid that gets my hair as a wig won’t be able to.”

Some UCF fans are sad to see Loudermilk’s hair go since it was such a fundamental part of his brand, but most agree that the cause is well worth the sacrifice.

“I hate to see the hair go as it has become somewhat of an iconic part of Mac,” Anthony Allan, a UCF freshman studying civil engineering better known as the “UCF stare kid,” said. “But seeing as it’s going to the great charity that is Locks of Love, I have no complaints. Mac’s a great guy, and this is just another testament to his character and willingness to give back.”

In addition to cutting his hair, Loudermilk also set up a GoFundMe page last month for Locks of Love, raising over $4,500 for the cause.

If cutting my hair changes a kids life so that they have more confidence in themselves, then I’ll always do that,” Loudermilk said.