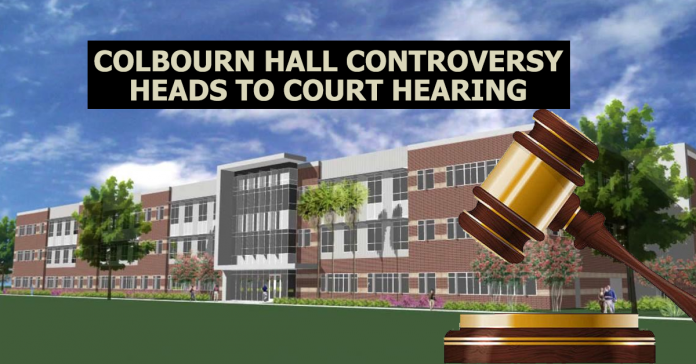 UCF’s lawyers will face a judge for the first time Tuesday in a case over whether the school broke the law by engaging in a cover-up of key records in the Colbourn Hall controversy.

The first hearing in the lawsuit Knight News filed seeking answers about what happened to a missing portion of audio – where the Trevor Colbourn Hall project was approved by a BOT committee – will take place at 2:30 p.m. in Orlando’s Circuit Court on March 5.


What happened to the missing portion of audio is a major issue in the case because it could show whether UCF’s General Counsel’s Office had any role in the decision-making process that has led to a handful of terminations. UCF, in turn, has refused to find or explain why part of the tape is missing – but now a judge can force UCF to answer under oath what happened to the public record.
Advertisement

Florida House Ethics Committee Staff Director Don Rubottom compared the missing tape and potential for a coverup to Watergate at the university, saying he was “old enough to remember Nixon” during a house committee meeting.

Rubottom stopped short of drawing any conclusions about the missing audio, and so has Knight News attorney Justin Hemlepp. However, Hemlepp is concerned with UCF dodging any explanation to what may have happened.

“We acknowledge that human or technical errors may have caused this. But I find it very suspicious the recording — what everyone is looking for — is missing,” Hemlepp said.

Judge Lisa T. Munyon recently issued an order saying a “hearing/trial” was “required,” however UCF filed a motion arguing that the trial was not required after all.

Knight News responded that a full hearing or trial is required, including because the missing audio remains unexplained. One issue that may be resolved at the hearing is whether a full trial is needed.

Meanwhile, UCF’s position in the case has prompted Knight News to challenge the constitutionality of a recent amendment to the Public Records Act that imposes new obligations that could delay access to records.

That legal scenario forced Knight News to give State Attorney Aramis Ayala and Attorney General Ashley Moody notice about the case that outlines UCF’s “willful and knowing refusal to comply with the Public Records Act,” which would be ‘a misdemeanor of the first degree,’ according to Florida Statutes. UCF has denied it violated the Public Records Act at all.

“The State Attorney’s Office just received the notice of hearing regarding the constitutional question and cannot discuss specifics at this time,” said Public Information Officer Eryka Washington, in response to the request for comment.

“On Tuesday the court scheduled a status hearing where the parties will discuss certain pretrial matters. We anticipate that at the hearing, we will set a date for the trial, at which the merits will be adjudicated,” said Hemlepp.

UCF has not responded to questions about the lawsuit Knight News has asked over the last several weeks, however, UCF has continued to respond to requests for public records, and to requests for comment on matters outside the lawsuit. UCF has previously pointed to the Bryan Cave investigation as clearing its top leadership, however, the House has continued to investigate and dig deeper than Bryan Cave.

The first hearing happens Tuesday, March 5 at 2:30 p.m. Stay tuned with Knight News as we cover the case.