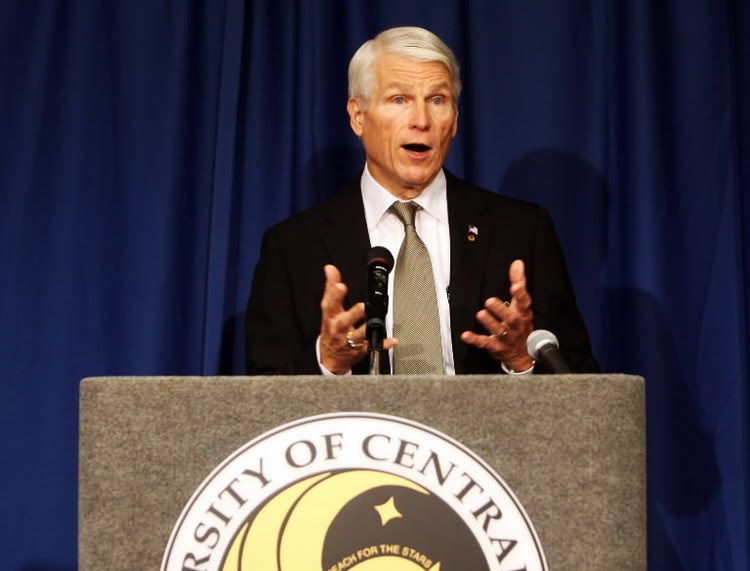 University of Central Florida President John Hitt had his contract confirmed for another year Thursday morning by the Florida Board of Governors, but not without public criticism by Knight News’ lawyer.

Prior to the unanimous vote confirming Hitt’s tenure, Marcos Marchena, the UCF Board of Trustees chairman, presented his recommendation before the BOG. In his presentation, he noted that UCF currently educates “one out of every four” first-generation students and its student body comprises of “approximately 43 percent minority students.”

“It seems like every outstanding project is followed by another more significant project, all in continuing to improve the educational process that we deliver to our students,” Marchena said. “These are statistics that may be glossed over by others, however I find them very significant and it’s all because of Dr. Hitt’s leadership that we’ve been able to achieve those types of statistics as well as results.”

Hitt, who has UCF’s president since 1992, was then confirmed without any questions directed to Marchena.

However, his confirmation was not without public comment. Justin Hemlepp, who has represented Knight News in its legal battles against UCF, discussed before the vote what he called “a stain on Dr. Hitt’s legacy.” While he did recognize to the board that “a young state university has become one of the largest and most successful institutions of higher learning on the planet” with Hitt at the helm — and noted the creation of UCF’s medical school and the construction of the downtown campus as key accomplishments — Hemlepp took aim at UCF’s lack of transparency and its battles with the press.

“The issue is one of open government,” he said. “As you all know, all government meetings must be open to the public and all non-exempt record must be available for public scrutiny. This is so the public can see what you do, praise you when you succeed, and point out when you fail, and this regards the press as the representative of the public.”

He continued: “UCF believes it is exempt from its constitutional obligations shared by other government officials. UCF has fought for more than five years keeping the actions of its student government a secret, and Knight News and I have fought the entire time to find out what it is hiding. UCF has continually invoked the Family Educational Rights and Privacy Act to justify redactions in student government budget documents, the closure of government hearings, and a particular hearing in which a US marine and veteran was kicked off the ballot for student government president for creating a website on the wrong day.”

Hemlepp was referring to Knight News’ numerous lawsuits against UCF for allegedly violating transparency laws, particularly one that was brought last year after Jacob Millich, an SGA senator, was kicked off the presidential ballot last year in a closed disciplinary hearing. Knight News has argued that FERPA, a law that protects information like grades and SAT scores, cannot be used to conceal the names of student government members when used in the context of their official capacity.

In the case involving Millich, Hemlepp requested to UCF’s legal team to depose Hitt to discover details related to a scandal in the 1990s in which he unilaterally shut down student government over its leaders’ questionable spending of public funds and required that they adopt transparency measures and audits. UCF’s response, according to Hemlepp in his comments to the board, was that Hitt “has no unique knowledge about the underlying facts” as to the recent rollbacks of SGA transparency measures.

“Apparently, at UCF, the deputies are running the show,” Hemlepp said.

On Tuesday, Knight News reported that an appellate judge ruled in a separate case against UCF’s defense of using FERPA to redact SGA officials’ names from budget documents, and required that unredacted copies be provided.

“I ask this board to consider open government when voting to affirm Dr. Hitt’s contract and that this board encourage Dr. Hitt to take a more active role in developing a positive relationship between UCF’s student press, administration, and student government and to foster a culture of transparency,” Hemlepp said in closing.

Chad Binette, a UCF spokesman, did not respond to a request for comment about Hitt’s confirmation or Hemlepp’s public statements.

UCF Student to Board of Trustees: More Cameras in Parking Garages