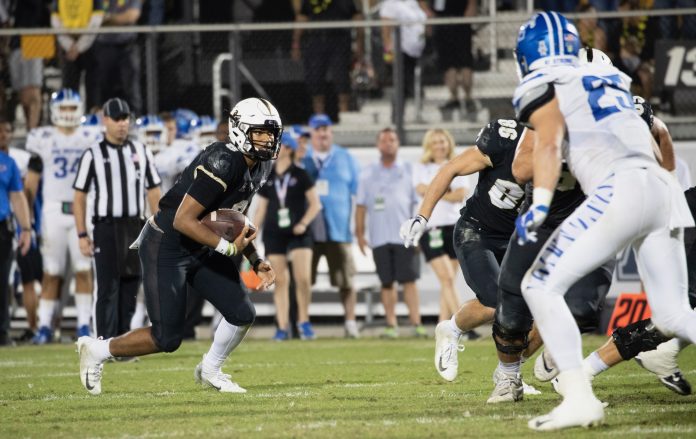 The No. 17 UCF Knights secured the clear bill of health for quarterback Darriel Mack Jr. ahead of Saturday’s 3:30 p.m. matchup against the Stanford Cardinal, but the quarterback carousel continues to go round with the return of Stanford quarterback K.J. Costello.

UCF offensive coordinator and quarterbacks coach Jeff Lebby said it’s good to have the redshirt sophomore Mack Jr. back and said despite missing camp, Mack Jr.’s experience and involvement in the QB room every day while recovering has been helpful to him.

UCF head coach Josh Heupel said the level of focus remains the same in the team that goes 1-0 each week because they are consistent in their approach – including before Saturday’s matchup against a Power Five opponent in the Stanford Cardinal.

“Our players understand that this is a big game, you know, but every one is,” Heupel said in Thursday’s pregame press conference. “You only get one opportunity, one 60-minute clock to go out and play your best and find a way to win.”

In Wednesday’s pregame press conference, Lebby said the starting QB spot is decided on a week-to-week basis and will ultimately be the guy that puts the team in the best situations and has the best predictable outcome.

Coming into the game, Stanford (1-1, 0-1 Pacific-12 Conference) has not allowed a first quarter touchdown in five consecutive games, but UCF may put an end to that streak.

Stanford head coach David Shaw said there are numerous things the team needs to keep an eye out for, but said he knows UCF is fast and confident, and the Knights’ offense rarely gives an opponent time to make substitutions on the defense.

“They’re very aggressive and do a lot on the defensive side. A lot of different coverages and blitzes,” Shaw said in the press conference. “This will be the quickest tempo team we’ve played in years. The biggest thing is you have to communicate quickly and get lined up.”

Looking back to the season openers, both teams suffered significantly during Week 1.

In a Tuesday press conference, Shaw said junior offensive tackle Walker Little sustained an injury in the game against Northwestern that will require season-ending surgery.

Shaw said Costello – who sustained a concussion after taking a hit during the season opener – would return to the starting lineup on Saturday after missing the second half of the Week 1 game and the Week 2 game.

Stanford’s starting lineup is also missing a few more key starters including junior offensive tackle Foster Sarell, and sophomore inside linebackers Ricky Miezan and Jacob Mangum-Farrar, who Shaw said are both not likely to play on Saturday. Both linebackers have freshmen stepping up to take their place.

Shaw said the Cardinal have depth on the O-Line and the freshmen who can fill the vacant roles, but said he won’t make any final decisions on starters until game time gets closer.

“More young guys are going to get playing time,” Shaw said during the pregame press conference.

While Stanford struggles to solidify its starting lineup, UCF’s quarterback room is back to its season-starting capacity with Mack Jr., redshirt senior Brandon Wimbush, redshirt freshman Quadry Jones and true freshman Dillion Gabriel all competing for the job.

Wimbush completed 12-for-23 on 168 yards and two touchdowns during the Knights’ season opener against the Florida A&M Rattlers. The 6-foot-2 graduate transfer from Notre Damewas expected to start things offfor the Knights in Week 2, but true freshman quarterbackDillon Gabriel made his first career start instead.

In his first career start against the FAU Owls, Gabriel finished 7-for-19 on 245 yards, rushed for 35 yards and a touchdown. Between the true freshman’s first two games, he has completed 16 of 32 passes on 372 yards and 5 touchdowns, along with his single rushing touchdown at FAU.

Heupel said the starting quarterback for Saturday’s matchup against the Stanford Cardinal is still to be determined and said he doesn’t know if he will play all the QB’s, but said Mack Jr. is in really good shape and Wimbush is back at full strength after not playing during Week 2.

“I think all of the guys are ready to go play at their highest level,” Heupel said.

Regardless of who plays at quarterback, Heupel said the Stanford defense is physical upfront and the UCF offense needs to take advantage of every opportunity and maximize the plays they have.

Heupel said he expects Stanford junior cornerback Paulson Adebo – who had eight tackles and broke up two passes during the game against USC, and five tackles and an interception against Northwestern – will be paired against UCF junior wide receiver Gabriel Davis for a majority of Saturday’s game.

“[Adebo’s] got the ability to get in and out of his brakes, he’s really good in his transition and he’s able to get his hands on a lot of footballs,” Heupel said. “So, it’ll be a highly contested battle and I anticipate that they’ll play him on Gabe [Davis] most of the day.”

The Knights hold a unique advantage over the Cardinal for Saturday’s game by consistently training in the geographic location in which the game will be played.

Shaw said there are numerous things to account for, but when it comes to the heat and humidity, his team is not taking it lightly.

“When they line up to play on Saturday, we want to make sure they are properly rested, have proper nutrition and are properly hydrated,” Shaw said. “And the guys have to buy in and be active participants.”

Heupel said despite the differences in approaches and style in offensive football, this is the team’s chance to prove they can play at a championship level.

“We’re anticipating a great atmosphere inside the stadium,” Heupel said. “The guys will be ready to play.”

The Knights are set to face the Cardinal Saturday at 3:30 p.m at. Spectrum Stadium.