UCF is searching for its sixth president, and the UCF Board of Trustees is asking for the community’s recommendation on who should sit on the Presidential Search Committee.

The 15-member committee will be tasked with identifying presidential candidates for the Board of Trustees to consider for UCF’s highest office.

“In finding UCF’s next leader, we must ensure our search is inclusive, collaborative and transparent and produces a diverse candidate pool that reflects our campus’ and community’s culture,” Seay wrote in a press release.

Once the search committee is manned, one of its first tasks will be identifying what qualities the UCF community desires in a presidential candidate, the release states.

The trustees aim to have a new president take office in the summer of 2020, replacing interim President Thad Seymour, who has led UCF since February following the abrupt resignation of former President Dale Whittaker.

Whittaker’s tenure — lasting less than a year — was cut short amid multiple investigations regarding how the university mismanaged roughly $85 million of state operating dollars for construction projects while under the watch of former President John Hitt.

The investigations centered around the nearly $38 million used for the construction of Trevor Colbourn building.

Whittaker offered his resignation on Feb. 19, and it was accepted during an emergency Board of Trustees meeting on Feb. 21.

Students, alumni, faculty, staff and community members are able to recommend individuals for the search committee by contacting the Board of Trustees office by email at boardoffice@ucf.edu no later than 5 p.m. on Thursday, Oct. 10. 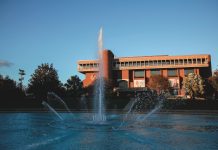